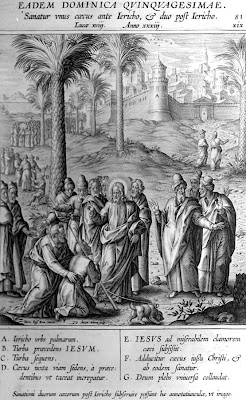 Quinquagesima Sunday is a semi-double of the second class and its liturgical colour is violet. The Gospel pericopes are taken from St. Luke and give the account of the giving of sight to the man born blind.

At Vespers yesterday afternoon the antiphons and psalms were of Saturday, the chapter, antiphon on the Magnificat and collect were proper to Quinquagesima Sunday. After the collect of the Sunday a commemoration was sung of SS Faustinus and Jovita followed by the Suffrage of the Saints. At Compline the Dominical preces were sung.

At Mattins, as on the previous two Sundays, the antiphons and psalms are those used on Sundays throughout the year. In the first nocturn the lessons are again from Genesis and this Sunday concern the story of Abraham. In the second nocturn the lessons are from St. Ambrose on the Book on the Patriarch Abraham and in the third nocturn the lessons are a homily from St. Gregory on St. Luke's Gospel of the man blind from birth whose sight was restored by the LORD. The blind man is a figure of the human race according to St. Gregory. A ninth responsory, Caecus sedebat secus viam etc, is sung in place of the Te Deum.

At Lauds the 'second scheme' of psalms is sung: Pss. 50, 117, 62, Benedictus es and 148. The antiphons at Lauds are proper for Quinquagesima Sunday, Secundum multitudinem etc, as are the antiphon at the Benedictus and the collect. After the collect of the Sunday a commemoration of SS Fautinus and Jovita is sung followed by the Suffrage of the Saints.

At all the Hours the antiphons and chapters are proper to Quinquagesima Sunday. At Prime the order of psalmody is that used when the second schema of Lauds is sung, i.e. Pss. 92, 99 (displaced at Lauds) and Ps. 118i & 118ii. The Dominical preces are sung.

In Mass the Gloria is omitted, the second collect is of SS Faustinus and Jovita, the third collect is A cunctis. A Tract is sung after the Gradual, the Credo is sung, the Preface is of the Blessed Trinity and Benedicamus Domino is sung as the dismissal by the deacon facing the altar. The ministers wear dalmatic and tunicle.

At Vespers the antiphons and psalms are those used on Sundays, the chapter is proper to the Sunday as is the antiphon at the Magnificat. The Office hymn is Lucis creator. After the collect of the Sunday the Suffrage of the Saints is sung. At Compline the Domincal preces are sung.