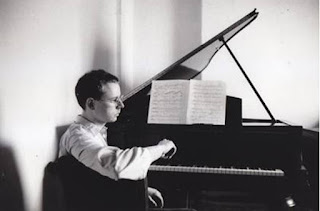 A friend of long-standing, of both The Saint Lawrence Press and of this writer, is the acclaimed composer of liturgical music Nicholas Wilton. Many readers will be familiar with Nicholas' first CD - which I wrote about last year. Nicholas won much acclaim for his liturgical music from, amongst others, Sir James Galway saying "This is one of my favourite CD's. Masterfully written, beautifully sung. It brings me closer to God. I have given it as a gift to many of my friends."

Now Nicholas has produced another CD this time featuring some of the compositions for piano that he has composed. I was delighted a couple of weeks ago on returning to London to find a autographed copy of the CD amongst my mail as a kind gift. The CD consists of eight short tracks of piano music composed between 1987 and 1989. As with his sacred music, these pieces show the influences of composers whom he most admired at the time; principally Chopin but also Scarlatti, Strauss, Mozart, Beethoven, Shostakovich and Liszt.

Individual tracks are available for download from the Tutti website. The CD is available direct from the composer and generous discounts are being offered for multiple purchases along with trade discounts. Nicholas has price lists available for UK, European and other International customers. Please contact him at sales@catholicmusic.co.uk .  Copies of his first CD are also available and attractive deals offered for buying both!

As an added incentive the first 250 copies of the CD are numbered and signed by the composer. With Christmas on the horizon this is an excellent opportunity for a lovely Christmas present - do please go and buy a copy - and download the tracks!
Posted by Rubricarius at 21:17

I agree; this is an excellent CD, and I've been enjoying it very much.

I wanted to thank you for this great read. I definitely enjoying every little bit of it I have you bookmarked to check out new stuff you post.

It brings me closer to God. I have given it as a gift to many of my friends.Johnson

Its true that music of a piano helps to relax. When I feel tired and bore I always Liston piano music. Best digital piano