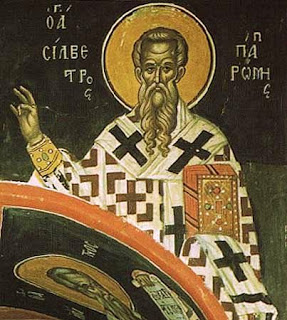 The feast of St. Sylvester I Pope and Confessor is of double rite and its liturgical colour is white.

At Mattins the invitatory is Regem Confessorum Dominum, Venite adoremus and the Office hymn is Iste Confessor. The antiphons and psalms from the ferial Psalter for Thursday are sung. In the first nocturn the lessons continue to be read from the Epistle to the Romans. The second nocturn lessons are hagiographical and in the third nocturn the homily is Sint lumbi from the Common of Confessor non-Pontiffs with the responsories of Confessor-Pontiffs. At Lauds the antiphons and psalms are again taken from the Psalter for Thursday. The Office hymn is Jesu, Redemptor omnium and it is sung with the Doxology of the Incarnation. After the collect of the feast a commemoration is sung of the Octave of the Nativity.

At the Hours the hymns have the Doxology of the Incarnation. The antiphons and psalms are from the ferial psalter for Thursday. At Prime the lectio brevis is Fungi sacerdotio.

Mass is sung after Terce. At Mass, Sacerdotes tui etc, the Gloria is sung, the second collect is of the Octave of the Nativity. The Creed is sung and the preface and communicantes in the Canon are of the Nativity.

Vespers are first Vespers of the following feast of the Circumcision. The antiphons O admirabile commercium etc are sung, doubled, with psalms from the Common of the BVM,, Pss. 109, 112, 121, 126 & 147. The Office hymn is Jesu, Redemptor omnium. There are no commemorations.

In the 'liturgical books of 1962' today is the seventh day within the Octave of the Nativity. At Mattins the antiphons and psalmody are festal (of the Octave) but there is only one nocturn of three lessons, from occurring Scripture. The curtailed version of Ps.88 is used. At Lauds the Dominical psalms are sung. A commemoration of St. Sylvester is sung after the collect of the Octave. At the Hours ferial antiphons and psalms are sung, the hymns do not have the tone or Doxology in honour of the Incarnation. At Prime the lectio brevis is of the season. The Mass is Puer natus with a commemoration of St. Sylvester in Low Masses only. Vespers are the same as the traditional rite.