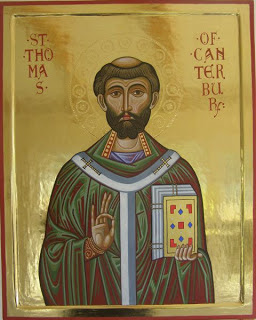 At Mattins the invitatory is Regem Martyrum Dominum, Venite adoremus and the Office hymn is Deus, tuorum militum sung with the Doxology of the Incarnation. The antiphons and psalms are taken from the Psalter for Tuesday. In the first nocturn the lessons are the Incipit of the Epistle of St. Paul to the Romans. In the second nocturn the lessons are hagiographical and in the third nocturn the lessons are from a homily of St. Chrysostom on St. John's Gospel. The Te Deum is sung. At Lauds the antiphons and psalms are from the ferial psalter. The Office hymn is Invicte Martyr unicum, again sung with the Doxology of the Incarnation. After the collect of the feast a commemoration is sung of the Octave of the Nativity.

At the Hours the hymns are sung with the Doxology of the Incarnation but the antiphons and psalmody are ferial. At Prime the lectio brevis is Justus cor suum.

Following the 'liturgical books of 1962' St. Thomas is reduced to a commemoration in the fifth day within the Octave of the Nativity. The liturgical colour of the day is white. However, festal psalmody is used at Mattins and Lauds, as on the feast of the Nativity. Mattins is reduced to one nocturn of three lessons. The verses of Ps. 88 are curtailed as on the feast. At the Hours the hymns are not sung with the Doxology of the Incarnation, the antiphons and psalmody are ferial, at Prime the lectio brevis is of the season. Mass is of a day within the Octave, with Gloria, commemoration of St. Thomas (at said Masses only), Creed, preface and communicantes; of the Nativity. Vespers are of the Octave of the Nativity without any commemorations.
Posted by Rubricarius at 08:01

Another strike against the "traditional" 1962 books...they do not commemorate S. Thomas at the very hour when he was martyred...in this even the "Novus Ordo," at least, permits an optional commemoration at Vespers.

Thanks to your excellent Ordo, I said Mass exactly above this morning. The idea of merely commemorating St Thomas on 29th December is absurd