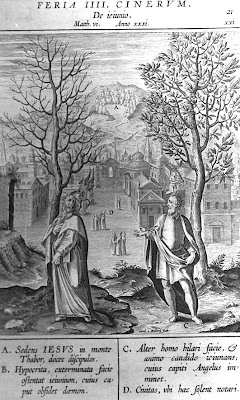 Ash Wednesday is a privileged greater feria although only of simple rite. No feast can be celebrated on this day of whatever rank. The liturgical colour of the day is violet. In earlier times the rite which gives the day its name, the sprinkling of ash on the heads of penitents, was reserved to those public penitents who underwent a public and dramatic expulsion from the church building. Although no longer generally practiced echoes of the above can be found in today's Liturgy which contains a general imposition of Ashes on all of those who wish to receive them. The Liturgy is interesting too in that much remains of the Office of the Septuagesima season as originally Lent began with the Office of the first Sunday.

The third part of the Pontificale Romanum still contains the rite for the Expulsion of Public Penitents - De Expulsione Publice Poenitentium ab Ecclesia in feria Quarta Cinerum. In that rite, after Sext, when the bishop was to celebrate Mass this day, the bishop vested in pontificals as far as the dalmatic and then donned a violet cope. Public penitents assembled in sack-cloth in their bare feet and were given a penance for Lent and then were given ashes, which the bishop had blessed. Then followed a ceremony that included the Seven Penitential Psalms and Litany. It culminated in the penitents being led, physically, from the church and expelled. The Caermoniale Episcoporum alludes to the Expulsion of Penitents in churches where it is the custom, C.E. Lib II, Cap.18, 2. 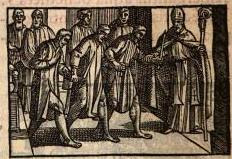 The Expulsion of Penitents from a 1611 edition of the Pontificale Romanum from Google Books.
The Office of Ash Wednesday begins with Mattins. The invitatory is Deum magnum Dominum, Venite adoremus and the Office hymn is Rerum Creator optime both from the ferial Office per annum. The antiphons Speciosus forma etc are sung with the nine psalms/psalm divisi of a single nocturn from the ferial Office for Wednesdays. The second scheme of Mattins for Wednesday is used, wherein Psalm 49 is split into three divisi rather than the usual two. The lessons in the nocturn are from a homily of St. Augustine reflecting on the LORD's Sermon on the Mount from St. Matthew's Gospel. The responsories are taken from the third nocturn of Quinquagesima Sunday. At Lauds the second scheme of psalmody is used (Pss. 50, 64, 100, Canticle of Anna & 145. The antiphon on the Benedictus and collect are both proper to the day. After the antiphon on the Benedictus has been sung in full after the canticle the choir kneels and the ferial preces are sung. After the collect of the day the Suffrage of the Saints is sung.

The blessing of Ashes and Mass follows None. The celebrant vests in a violet cope while the deacon and subdeacon wear violet folded chasubles. The organ is silent following the general rule when folded chasubles are worn. The Ashes, made from burning of the preceding year's Palms, are blessed with four collects of blessing. The short conclusion of these prayers may indicate the blessing was separated by the Expusion of Penitents from the Mass which follows. The Ashes are imposed whilst two antiphons are chanted Immutemur habitu and Inter vestibulum. These are followed by the poignant responsory Emendemus in melius. The Mass that now immediately follows is proper. The Gloria is not sung. The second collect is A cunctis, the third Omnipotens. The preface of Lent is sung for the first time this year. The ferial tones are used for the orations, preface and Pater noster. The choir kneels for the Orations and from the Sanctus until Pax Domini. After the last collect the deacon sings Humiliate capita vestra Deo and the celebrant sings the Oratio super populum. The dismissal is Benedicamus Domino, sung by the deacon facing the celebrant and altar.

Vespers are ferial. The Office hymn is Caeli Deus sanctissime. The ferial preces are sung with the choir kneeling. After the collect the Suffrage of the Saints is sung. At Compline the Dominical preces are sung, kneeling.

In the 'liturgical books of 1962' the ferial preces are sung at Lauds and Vespers only. At Lauds and Vespers Suffrage has been abolished. At Prime there are three psalms 25, 51 & 52 and the chapter is the festal Regi saeculorum - bizzare! At Prime and the Hours the preces are omitted. Mass is sung after Terce. At the blessing of Ashes and Mass the ministers wear dalmatic and tunicle. Judica me Deus etc is omitted from the beginning of Mass. There is only one collect. The extended kneeling is omitted with the choir rising at the conclusion of the Canon. The dismissal is Ite missa est.
Posted by Rubricarius at 08:01

Whenever you publish your work challenging the myth that major changes began in 1962 (which I will most definitely order!) PLEASE include how Pius XII destroyed the venerable after midnight Holy Communion fast.
Our priest is the only I know of that still enforces this holy obligatory tradition.