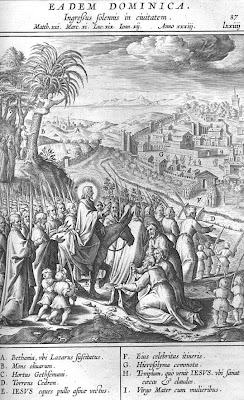 Palm Sunday is a privileged semi-double Sunday of the first class and the sixth, and last, Sunday in Lent. No feast can take its place. In the Roman rite Palm Sunday, in its authentic form, is a truly magnificent day with the splendid solemn blessing of Palms and Procession before the principle Mass. The liturgical colour, throughout, is violet.

The Office began, as usual in Lent, with Vespers yesterday morning. Vespers were sung with the antiphons and psalms of Saturday. The chapter, from Philippians, Fratres: Hoc enim senite, was proper to the Sunday. The Office hymm was Vexilla regis. The antiphon on the Magnificat, Pater juste, and collect were proper to Palm Sunday. The Suffrage is omitted being Passiontide. At Compline, sung at the usual time, the Dominical preces were sung.

At Mattins there are the usual three nocturns. The antiphons and psalms at all the nocturns are those appointed for Sundays. In the first nocturn the lessons are from the book of Jeremiah the Prophet. In the second nocturn the lessons are a sermon of St. Leo the Great and in the third a homily of St. Ambrose. The Te Deum is not sung but a ninth responsory, Circumdederunt me viri mendaces etc., is sung in its place. At Lauds the antiphons are proper, Dominus Deus etc., to Palm Sunday and the second scheme of Psalms is sung (50, 117, 62, Benedictus es, 148). The chapter is proper to the Sunday and the Office hymn is Lustra sex.

At Prime and the Hours the antiphons are proper to the Sunday, Pueri Hebraeorum etc. At Prime psalms 92, 99 (displaced from Lauds) and the first two divisi of Ps. 118 are sung. The Dominical preces are sung and the short lesson is Faciem meam. At Terce the antiphon is Pueri Hebraeorum vestimenta which again will be heard shortly afterwards at the distribution of Palms.

After Terce, as usual, the Asperges ceremony takes place before Mass. The deacon and subdeacon wear violet folded chasubles. Being in Passiontide the Lesser Doxology is omitted after the verse of the Miserere. After the Asperges the celebrant and ministers proceed to the Epistle corner and begin the solemn blessing of Palms whilst the choir sing the antiphon Hosanna fili David, O Rex Israel etc. The rubrics direct that the Palms are to be blessed at the Epistle side of the altar. 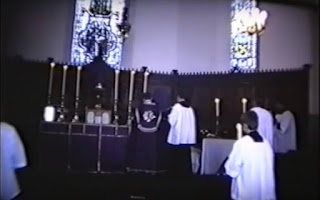 (The above image is a screen shot from an historic video a friend alerted me to be found on YouTube entitled 'SSPX UK History'. In the first twenty minutes or so of the video one can see some images of Traditional Holy Week being celebrated in the, then, newly acquired church of SS Joseph and Padarn in north London in 1983.  There is also a clip from a BBC documentary that has footage of the 1982 Palm Sunday liturgy celebrated a week or so after the church opened.  The $$PX banned the traditional rites from 1983 so the images are particularly poignant.)

The blessing begins with the celebrant reading an antiphon Hosanna Filio David followed by a collect Deus, quim diligere and then the reading of an Epistle and Gospel. The normal ceremonies of High Mass are followed. The subdeacon removes his folded chasuble to sing the Epistle taken from the Book of Exodus. Following the Epistle two texts are given, Collegerunt pontifices and In monte Oliveti (the latter will appear again as a responsory during the Triduum) to be sung as a 'gradual', both may be sung.


O God, who, by the wonderful order of Thy disposition, hast been pleased to manifest the dispensation of our salvation even from things insensible: grant, we beseech Thee, that the devout hearts of Thy faithful may understand to their benefit what is mystically signified by the fact that on this day the multitude, taught by a heavenly illumination, went forth to meet their Redeemer, and strewed branches of palms and olive at His feet. The branches of palms, therefore, represent His triumphs over the prince of death; and the branches of olive proclaim, in a manner, the coming of a spiritual unction. For that pious multitude understood that these things were then prefigured; that our Redeemer, compassionating human miseries, was about to fight with the prince of death for the life of the whole world, and, by dying, to triumph. For which cause they dutifully ministered such things as signified in Him the triumphs of victory and the richness of mercy. And we also, with full faith, retaining this as done and signified, humbly beseech Thee, O holy Lord, Father almighty, everlasting God, through the same Jesus Christ our Lord, that in Him and through Him, whose members Thou hast been pleased to make us, we may become victorious over the empire of death, and may deserve to be partakers of His glorious Resurrection.

The celebrant then puts on incense and blesses it. The Palms are then aspersed with lustral water, the celebrant saying in a low voice Asperges me etc, and then censed. Another collect, Deus, qui Filium is then sung. The celebrant then receives his Palm from the senior canon present. If no other priest is present the celebrant kneels and takes the Palm from the of the altar, kisses it then passes it to the subdeacon who places it again on the mensa. The celebrant then gives Palms to the deacon and subdeacon and other ministers and then the people. The Palm is kissed first and then the celebrant's hand. During the distribution the antiphons Pueri Hebraeorum and Pueri Hebraeorum vestimenta are sung. After the distribution the celebrant and ministers go back to the altar, bow to the Cross and then go to the Epistle corner where the celebrant's hands are washed. Then, at the missal, he sings the collect Omnipotens sempiterne. 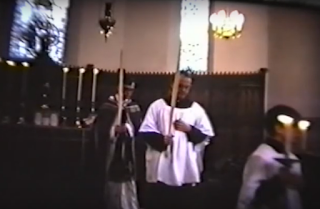 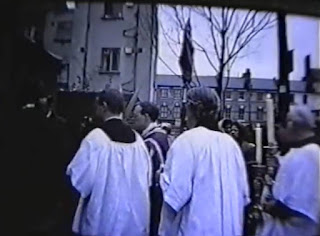 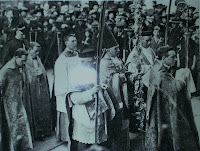 Mass then follows the usual manner. The celebrant removes his cope and dons his chasuble. The preparatory prayers are said but the psalm Judica me is omitted being in Passiontide. The introit is Domine, ne longe etc. There is no Gloria. No commemoration is made of an occuring Office on Palm Sunday so there is only one collect. Psalm 21 is sung in its entirety as a Tract. The major difference from any other Sunday is singing of the Passion according to St. Matthew by three additional deacons of the Passion. The text of the Passion is Matthew 26: 1-75; 27: 1-66. After the singing of the Passion the last part, Altera autem die...lapidem cum custodibus, is sung with the ceremonies of a Gospel by the deacon of the Mass (having removed his folded chasuble etc) to a most haunting tone.

Sext and None again have proper antiphons, Tibi revelavi etc and Invocabo etc respectively. At Vespers the antiphons and psalms of Sunday are sung. The chapter is Hoc enim senite and the Office hymn is Vexilla regis, both as at Vespers yesterday. At Compline the Dominical preces are sung.

In the 'liturgical books of 1962' Palm Sunday has been radically given a 'makeover' to the extent that the official title of the day has even been changed to 'Second Sunday of the Passion or Palm Sunday'.  For those interested in the depressing catalogue of destruction an earlier post here gives the details, simply ignore the references to occurring Offices.  The image below shows a typical blessing of Palms in the reformed rite. 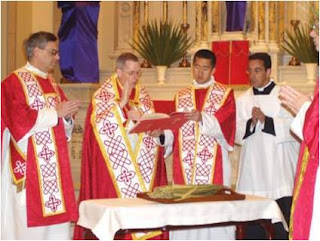 Poignant is the correct word. The modern rite is a mutilated, sorry thing. Deus qui miro is beautiful.

The longer I was in the traditional movement,the more I realized just how important the pre-1950 liturgical traditions are to the Church.
For all the good they may do,the CMRI are severely misguided doing the post 1956 destructive mutations.(no offense I hold no ill will towards them)
Its telling how the "reformers" changed the oldest traditions first in 1945-1951-1955-1957-1958.
The SSPX video was great,I watched the first 30 minutes.
Fr.Black seems like a loyal intelligent holy priest.
Dominus Vobiscum

Could you please post Holy Saturday from the Ordo,please???

If you scroll into previous years you will find Holy Saturday.