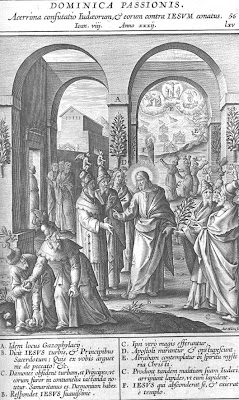 The most apparent and visually striking feature of this Sunday is the Roman practice of veiling all crosses and images with violet cloth. The custom seems to have developed from the words in the day's Gospel 'Jesus autem abscondit se' - but Jesus hid himself. The veiling takes place after Mass on Saturday morning before Vespers are sung. The praxis should not be confused with that of Lenten Array where holy images were covered in off-white linen or cloth from the beginning of Lent. From Vespers along with the veiling, the liturgy took on certain more penitential aspects that belong to Passiontide. The Gloria Patri is omitted from the invitatory of Mattins, from the responsories of Mattins and from the short responsories of the Hours. It is also omitted from the Asperges ceremony before Mass on both Passion Sunday and on Palm Sunday. In Masses 'of the season' Gloria Patri is also omitted from the introit and Lavabo along with the psalm Judica me Deus. The Suffrage of the Saints is also omitted until after Trinity Sunday.

At Vespers, yesterday morning, the antiphons and psalms were those of Saturday, the chapter was proper to Passion Sunday. The Office hymn was the magnificent Vexilla regis. This hymn is sung at Vespers throughout Passiontide and at the Mass of the Pre-Sanctified on Good Friday. The antiphon on the Magnificat and collect were proper to the Sunday. After the collect of the Sunday a commemoration was sung of St. Francis of Paula. At Compline the Lesser Doxology was omitted from the short responsory. The Dominical preces were omitted due to the occurring double feast.

At Mattins the invitatory is Hodie, si vocem Domini audieritis, Nolite obdurare corda vestra from Ps. 94 and a special rubric indicates the omission of that verse in the psalm. The hymn is Pange, lingua ...Lauream. The same invitatory and hymn are sung from today until the Sacred Triduum in the Office of the Season. The antiphons given in the Psalter for Sundays are sung. In the first nocturn the lessons are the Incipit of the book of Jeremiah. In the second nocturn the lessons are taken from the ninth sermon on Lent by St. Leo the Great. In the third nocturn the lessons are a homily of St. Gregory on St. John's Gospel. The Te Deum is omitted as on other Lenten Sundays and a ninth responsory, Quis dabit capiti, sung in its place. At Lauds the antiphons, Vide Dominum etc., are proper to the Sunday and the second scheme of Psalms sung (50, 117, 62, Benedictus es & 148). The chapter is proper to the Sunday and hymn is Lustra sex. After the collect of the day a commemoration is sung of St. Francis of Paula. The Suffrage is omitted in Passiontide as noted above.

Mass is sung after Terce. The ministers wear folded chasubles. The Gloria is not sung. The second collect is of St. Francis of Paula. There is no third collect in Passiontide. As usual in Lent a Tract is sung after the Gradual. The Creed is sung, the preface is of the Cross and the dismissal is Benedicamus Domino sung by the deacon whilst facing the celebrant and altar.

Vespers are of the Sunday with psalms 109, 110, 111, 112 & 113. The Office hymn is Vexilla regis. After the collect of the Sunday a commemoration is sung of St. Francis of Paula. At Compline the Dominical preces are omitted.

In the 'liturgical books of 1962' Passion Sunday becomes re-branded as 'First Sunday of the Passion'. There is no commemoration at Vespers. Mattins is reduced down to usual single nocturn of three lessons. At Prime the psalmody is Ps. 53 and the first two divisi of Ps. 118. At Mass there is only a single collect and the dismissal is Ite, missa est. The ministers wear dalmatic and tunicle instead of folded chasubles.