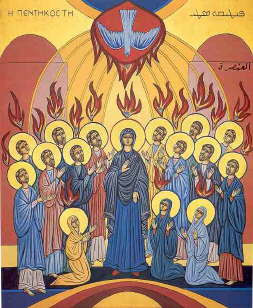 Whitsun, the feast of Pentecost, is one of the greatest feasts in the Liturgical Year ranking next only to Pascha and, like the Queen of Feasts, is a Double of the First Class with a privileged Octave of the first order. The liturgical colour of the feast and its Octave is red. The feast of St. Bernardine of Siena is omitted this year.

After the beautiful and splendid ceremonies of the Vigil of Pentecost yesterday morning first Vespers of the feast were sung in the afternoon. On this great feast the rubrics require the most solemn celebration of Vespers with the Hebdomadarius assisted by six pluvialistae in pariti wherever possible. The solemn tone of Deus, in adjutorium is sung at Vespers, Mattins and at Lauds. The antiphons, Cum complerentur dies Pentecostes etc are proper and were sung with psalms 109, 110, 111, 112 & 116. During the singing of the hymn, Veni, Creator Spiritus, all knelt during the first verse. All hymns of the feast and Octave have the Doxology Deo Patri sit gloria, Et Filio, qui a mortuis, Surrexit ac Paraclito, In saeculorum saecula. Veni Creator is sung in tone 8, the other hymns of the Office in tone 1. At Vespers there were no commemorations. At Compline Te lucis was sung as described above and the Dominical preces are omitted for the Octave.

Mattins for the feast, and Octave, is like Pascha in only having a single nocturn of three psalms and three lessons. The invitatory is Alleluia, Spiritus Domini replevit orbem terrarum, Venite adoremus Alleluia. The Office hymn is Jam Christus astra ascenderat. The antiphons Factus est etc are sung with psalms 47, 67 & 103. The lessons are from a homily of St. Gregory the Great on St. John's Gospel. At Lauds the antiphons, Cum complerentur dies Pentecostes etc, are the same as at Vespers and are sung with the Dominical psalms (Pss. 92, 99, 62, Benedicite & 148). The Office hymn is Beata nobis gaudia. There are no commemorations.

At Mass the Vidi aquam is sung for the last time this year and the aspersion takes place with Baptismal water taken after the blessing of the font yesterday (but before the infusion with Chrism!) The Gloria is sung and there is only one collect. After the Alleluia the beautiful sequence Veni, Sancte Spiritus is sung. The Credo is sung. The preface, Communicantes and Hanc igitur are proper to the feast and used throughout the Octave. According to the rubrics of the Gradulae four cantors lead the singing during Mass. In some places, particularly France, the practice found in so many medieval uses is followed where on great feasts the cantors wear copes and the Crucifer and acolytes tunicles.

Following the 'liturgical books of 1962' the magnificent ceremonies of the Vigil have been abolished - no doubt as they would remind the faithful of the traditional form of Holy Saturday, the hymns of Compline, Prime, Sext and None are sung to the solemn tone but do not have the Pentecost Doxology. The antiphons at the Little Hours are doubled.
Posted by Rubricarius at 07:01

The Pentecost Octave and its readings are, as you stated, a wonderful link to the Easter Vigil, and a meditatively beneficial way to conclude Eastertide. Those using '62 Missal truly are at a loss; how, I wonder, do they muse on the specific Hanc Igitur that, for some reason, remains this week in the Canon?

And how I tire that, on every Pentecost Monday, we have to hear "How Paul VI wept" upon seeing green vestments laid out for him for his morning Mass....

Agree on being sick of reading about Paul VI
"Weeping" that Monday.
He decimated the Roman Rite & had the authority to reverse all of the changes.
I also tire of people defending Pius XII & his imagined cluelessness of the 1951-1958 changes.
Pius XII gave the
LITURGICAL CHANGE COMMISSION his blessing & full support.
Thank God Bishop Ramolla & Fr.Moylan obey the pre-1951 Missal.