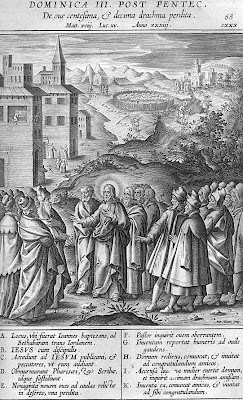 Yesterday afternoon second Vespers of the feast of SS Peter and Paul were sung. The antiphons Juravit Dominus etc were sung, doubled, with Pss. 109, 112, 115, 125 & 138. The chapter was Misit Herodes and the Office hymn of the feast, Decora lux. After the collect of the feast commemorations were sung of the Sunday and of the Octave of the Sacred Heart. The Suffrage was omitted. At Compline the Dominical psalms were sung and Te lucis had the Doxology and tone of the Octave. The Dominical preces were omitted.

At Mattins the invitatory, hymn, antiphons and psalms are as on the feast of the Sacred Heart but the antiphons are not doubled. In the first nocturn the lessons are a continuation of the First Book of the Kings. The responses are of the Octave. In the second nocturn the lessons are from the Encyclical of Pius XI in 1928 that, inter alia, gave the feast an Octave. In the third nocturn the homily is from St. Gregory on St. Lukes Gospel. The Te Deum is sung. At Lauds the antiphons Unus militum etc are sung, as on the feast, with the Dominical psalms. The Office hymn is Cor, arca legem continens. After the collect of the Sunday commemorations are sung of the Commemoration of St. Paul the Apostle, of St. Peter, of the Octave of the Sacred Heart and of the Octave of St. John the Baptist. The Suffrage is omitted.

At Vespers there is a colour change to red and first Vespers of the feast of the Precious Blood are sung. The antiphons Quis est iste etc are sung, doubled, with psalms 109, 110, 111, 112 and 116. The Office hymn is Festivis resonent compita vocibus. After the collect of the feast a commemoration is sung of Sunday. The Suffrage is omitted. At Compline the Dominical preces are omitted.

In the 'liturgical books of 1962' the Octave of the Sacred Heart has been abolished as have the Octaves of the Nativity of St. John the Baptist and SS Peter and Paul. The liturgical colour of the day is green. Mattins is is cut down to a single nocturn of three lessons. At Lauds there are no commemorations. Mass has a single collect and the preface of the Trinity.

Rubicarius: The Ordo did not contain a commemoration for the third order Octave of the Sacred Heart of Jesus in the Mass for yesterday, the Feast of the Most Precious Blood. Was this an oversight (very rare) or is this a practice not to have two commemorations on the same day of aspects of Our Saviour’s Passion?

Thank you Rubricarius; I was certain it was not an oversight.