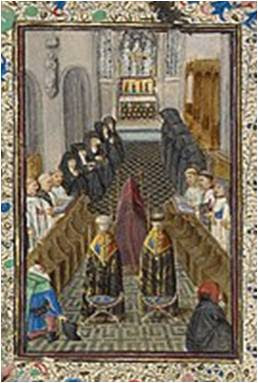 All Souls' Day is of Double rite. Since 1917 it has a standing almost like that of a primary Double of the First Class of the Universal Church. The day gained an independent Office after the 1911-13 reform. Prior to then Vespers, Mattins and Lauds of the Dead were sung in addition to the Office of the second day within the Octave of All Saints (as indeed was the Office of the Dead sung on the Mondays of Lent and Advent and certain other days). The reforms of Pius X gave the day its own Office with the creation of Little Hours of the Dead and some adjustments to the lessons of Mattins. The day excludes the occurrence of any other Office.

At Mattins the invitatory and psalms are those used for Mattins of the Dead. The invitatory is Regem cui omnia vivunt, * Venite adoremus. In the first nocturn the antiphons Dirige etc (hence the English term Dirge) are sung, doubled, with psalms 5, 6 & 7. As at Vespers yesterday Requiem aeternam is sung in place of Gloria Patri at the end of each psalm. The lessons are taken from the Book of Job. The first lesson, Parce mihi, is the first lesson from the Office of the Dead but the second and third lessons are now proper to the day in their current arrangement. Homo natus de muliere etc, the second lesson (the fifth lesson before 1911), is highly poignant being familiar as a Funeral Sentence in the Book of Common Prayer, its source being the Sarum Office. In the second nocturn the antiphons In loco pascuae etc are sung with psalms 22, 24 & 26. The lessons in the second nocturn are new and taken form the book of St. Augustine on the care for the Dead. In the third nocturn the antiphons Complaceat etc are sung with psalms 39, 40 and 41. The lessons are from the First Epistle of St. Paul the Apostle to the Corinthians (pre-1911 these too were taken from the Book of Job). At Lauds the antiphons Exsultabunt etc are sung with psalms 50, 64, 62, Ego dixi and 150. After the antiphon on the Benedictus has been sung at the end of the canticle the choir kneels, as at Vespers yesterday, and a Pater noster is said followed by a series of versicles and their responses and the collect Fidelium.

The Hours have a special form as introduced in the 1911-13 reform. At Prime the Office begins after the silent recitation of the Pater, Ave and Credo with psalms 87, 27 & 31 without antiphons. Although the Miserere is sung at Lauds the displaced psalm is not transferred to Prime as on other days. At the reading of the Martyrology a special preamble is read, Hac die Commemoratio Omnium Fidelium Defunctorum..., before the announcement of the next day Tertio Nonas Novembris.etc. The psalms are sung either to the tone in directum or to a tone introduced with the Office of All Souls Day. Terce follows a similar, simplified, form and has psalms 37i, 37ii & 55. Sext has psalms 69, 84 & 85 and None psalm 101 divided into three sections. The Office of the day ends with None.

In the Universal Church three Masses may be celebrated by every priest on this day. This practice was first observed in Spain with an indult from Benedict XIV and extended to the Universal Church by Benedict XV in 1915 after the carnage of the First World War. The accepted practice of Collegiate churches is for the first Mass to be celebrated after Lauds, the second after Prime and the third after None. In all three Masses the sequence Dies irae is sung and the preface of the Dead is sung. Common practice is to have the Absolution of the Dead at a catafalque after the principal Mass. The Office of the day ends with the Mass after None.

Vespers see a colour change to green and Vespers of the following Sunday are sung. The antiphon on the Magnificat is Vidi, Dominum for the Saturday before the first Sunday of November. After the collect of the Sunday a commemoration of the Octave of All Saints is sung. The Suffrage is omitted, as are the Dominical preces at Compline, being within an Octave.

In 'the liturgical books of 1962' the sequence Dies irae may be omitted in the second and third Masses when they are not sung. The last Gospel is omitted when the Absolution takes place. Vespers of the Dead, which were transferred in the 1955 stage of the reform from the evening of All Saints' Day to the evening of All Souls' Day, are entirely omitted this year. At Vespers of the Sunday there are no commemorations and the Octave of All Saints has been abolished.

Image: Wikipedia. Note the two choir rulers in copes.
Posted by Rubricarius at 07:01

Email ThisBlogThis!Share to TwitterShare to FacebookShare to Pinterest
Labels: Double, Office of the Dead