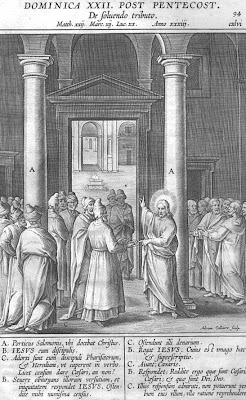 The twenty-second Sunday after Pentecost is of semi-double rite and its liturgical colour, from Mattins, is green. This year it is the third Sunday of November. The second Sunday of November, and its week, are both omitted this year. The Gospel pericopes from St. Matthew's Gospel contain the account of the Pharisees trying to trap the LORD over tribute to Caesar and the LORD's rebuttal of "Render therefore to Caesar the things that are Caesar's and to God those things that are God's.

Vespers yesterday afternoon were second Vespers of the feast of the Dedication of the Lateran Basilica. The antiphons Domum tuam, Domine etc were sung, doubled, with Pss. 109, 110, 111, 112 & 147. The Office hymn was Caelestis urbs Jerusalem. After the collect of the feast commemorations were sung of the Sunday, the antiphon on the Magnificat being Muro tuo for the Saturday before the third Sunday of November, and of St. Andrew Avellino. The Suffrage of the Saints was omitted. At Compline the Dominical psalms were sung and the preces were omitted.

Mass is sung after Terce. The Gloria is sung, the second collect is of St. Andrew Avellino, the third collect is of SS Tryphon & Others. The Creed is sung and the preface is of the Blessed Trinity.

In England & Wales, being the Sunday closest to the 11th November, a Mass of Requiem may be celebrated for the War Dead. The anniversary Mass for the Dead is sung with one collect, the sequence Dies Irae and the preface for the dead. After the last Gospel the ceremony of Absolution over the catafalque may follow.

Vespers are of the Sunday. The Office hymn is Lucis creator. After the collect of the Sunday commemorations are sung of the following feast of St. Martin, of St. Andrew Avellino and of St. Mennas. The Suffrage of the Saints is omitted as are the Dominical preces at Compline due to the double feasts.