Immaculate Conception of the BVM 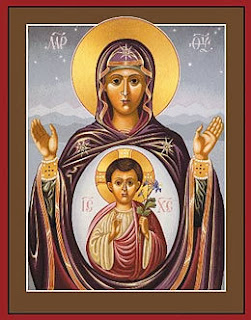 The feast of the Immaculate Conception of the BVM is a Double of the First Class with an Octave. The colour of the feast and its Octave is white. The feast takes precedence over the second Sunday of Advent. The feast was prepared for by a Vigil, commemorated in the Office of St. Ambrose yesterday. The feast, as the Conception of the BVM, gained an Octave in 1693 and was raised to a Double of the 2nd Class. Leo XIII raised the feast to a Double of the First Class, adding the Vigil, in 1879. The majority of the texts of the current Office and Mass are from 1863.

At Vespers yesterday afternoon the antiphons Tota pulchra etc were sung, doubled, with psalms 109, 112, 121, 126 & 147. The Office hymn was Ave maris stella. After the collect of the feast a commemoration was sung of the Sunday. At Compline Te lucis was sung with the Doxology Jesu tibi sit gloria and to the melody proper to the Incarnation.

At Mattins the invitatory is Immaculatum Conceptionem Virginis Mariae celebremus: Christum ejus Filium adoremus Dominum and the Office hymn is Praeclara custos Virginum. In the first nocturn the antiphons Admirabile est etc are sung, doubled, with psalms 8, 18 & 23. The lessons are taken from the third chapter of the Book of Genesis. In the second nocturn the antiphons Diffusa est etc are sung with psalms 44, 45 & 86. The lessons are from a sermon of St. Jerome and and the sixth lesson is from the acts of Pius IX. In the third nocturn the antiphons Sanctimonia et magnificentia etc are sung with psalms 95, 96 & 97. The homily is from St. Germanus on St. Luke's Gospel. The ninth lesson is of the Sunday, a homily from St. Gregory on St. Matthew's Gospel. The Te Deum is sung.

At Lauds the antiphons Tota pulchra etc are sung, doubled, with psalms 92, 99, 62, Benedicite & 148. The Office hymn is O gloriosa Virginum. After the collect of the feast a commemoration is sung of the Sunday.

At Prime and the Hours the antiphons Tota pulchra etc are sung with the festal psalms. The hymns have the Doxology Jesu tibi sit gloria and the melody of the Incarnation. At Prime (Pss. 53, 118i & 118ii) the versicle in the short responsory is changed to Qui natus es de Virgine and the lectio brevis is Signum magnum apparuit.

At Vespers the antiphons Tota pulchra are sung doubled, with the psalms of the BVM. The hymn is Ave maris stella. After the collect of the feast a commemoration is sung of the Sunday.

In the 'liturgical books of 1962' the feast has been stripped of both its Vigil and Octave. At Compline and the Hours the Doxology is not changed and the hymns are not sung to the melody for hymns of the Incarnation. At Mattins there is no ninth lesson of the Sunday. At Prime the lectio brevis is of the season, Domine, miserere. At Mass the last Gospel is In principio. 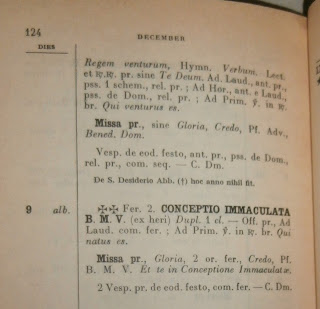 Having lived in Post Falls, ID in the late 1990's, days like today could literally divide families (the other being when to fast in September for Ember Days). Back then the two main players in Tradistan were the SSPX and CMRI (the FSSP hadn't yet arrived); the CMRI today is observing Advent II along with the Novus Ordo. Family squabbles could well revolve around whether or not tomorrow is obligatory to hear Mass. Liturgy by committee is never really "pastoral", is it?

As far as I know, the non-existent vigil remains a day of fast and abstinence for the priests of the Society of Saint Pius X, too.

So it was Pius XII who changed the rubrics in 1957. Why do sedevacantists not follow them (also Holy Week liturgy), although they were made by a legitimate Pope, so by the Church, which can not give bad laws? Don't they ignore papal legislation? With what right? Isn't that protestant?

@JohnR,
As you wrote elsewhere a classic case of 'tinkeritis'!

@CH,
It does seem rather a peculiar praxis especially when they claim to be in communion with Rome.

Prior to Pius X, would not the feast have been transferred to the Monday?

@Andre,
Prior to 1897 where the feast was not Patron or Titular it would have indeed been transferred but following Leo XIII's changes to the rubrics any D1Cl could take precedence over Advent 2, 3 & 4, a praxis retained after the 1911-13 changes.

CMRI are only trad group that follows post 1951 changes.
Bishop's Ramolla,Dolan,
Sanborn,Trinh,SSPV,etc...
all follow the pre-1951 system.(1939 to be technical)
-Andrew