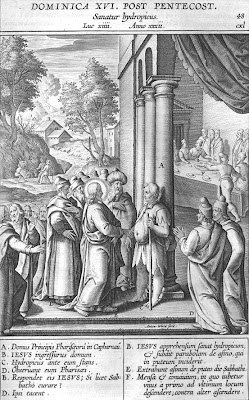 The sixteenth Sunday after Pentecost is of semi-double rite and the liturgical colour, until None, is green. This year it the fourth Sunday of September. The Gospel pericopes from St. Luke tell of the LORD healing the man with dropsy on the Sabbath. The Vigil of St. Matthew the Apostle was anticipated yesterday. (Due to the occurrence of the Ember Saturday the Vigil of St. Matthew was not commemorated in the Office but commemorated at Mass, or private Masses may have been celebrated of the Vigil with commemorations of SS Januarius & Others and the Ember Saturday).

At Vespers yesterday afternoon the antiphons and psalms of Saturday were sung. The Office hymn was Jam sol recedit igneus. The antiphon on the Magnificat was Adonai, Domine for the Saturday before the fourth Sunday of September. After the collect of the Sunday commemorations were sung of the preceding Office of SS Januarius & Others and of SS Eustace & Others. The Suffrage was omitted. At Compline the Dominical preces were omitted.

Mass is sung after Terce. The Gloria is sung, the second collect is of SS Eustace & Others. Today there is no third collect. The Creed is sung and the preface is of the Holy Trinity.

Prior to the reform of 1911-13 the third Sunday in September was observed as the feast of the Seven Dolours of the BMV. One Mass, but not the Conventual Mass, may be celebrated of the Seven Dolours in white vestments. The Mass Stabant juxta Crucem is sung with Gloria, the second collect of the Sunday, the third collect of SS Eustace & Others, the sequence Stabat mater, Creed, preface of the BVM and the last Gospel is of the Sunday.

Entry from a 1952 Ordo for Tarbes & Lourdes showing the option of having the Mass of the Seven Dolours on the third Sunday in September (and the fourth Sunday of September in the sense of the Mattins lessons).
At Vespers there is a colour change to red and first Vespers of the feast of St. Matthew are celebrated. The antiphons Hoc est praeceptum meum etc are sung, doubled, with Pss. 109, 110, 111, 112 & 116. The Office hymn is Exsultet orbis gaudiis. After the collect of the feast commemorations are sung of the Sunday and of SS Eustace & Others. The Suffrage is omitted as are the Dominical preces at Compline.

In the 'liturgical books of 1962' the Vigil of St. Matthew has been abolished and the Ember Days are a week later. At Vespers there were no commemorations. Today is the third Sunday of September. Mattins is cut down to a single nocturn of three lessons. At Lauds there are no commemorations. At Mass there is but a single collect. Vespers are of the Sunday without any commemorations.

You probably should have mentioned that the Feast of the Seven Dolours is transferred this year from the 3rd (previous) to the 4th (this) Sunday of September due to the Feast of the Holy Name of Mary.

Paulus Discens, Rubricarius makes clear in the the Ordo the Sundays which may have the celebration of the two Marian solemnities. I, for one, was not confused.

The celebration of the Seven Dolours on the third Sunday, its former place in the calendar, follows Sundays in September and not Sundays of September in the sense of the Mattins lessons. I have updated the post to include an entry from a 1952 Ordo for Tarbes & Lourdes showing the Seven Dolours being celebrated when the Sunday was also the fourth Sunday (in the Mattins sense).

What is sung during Lauds?
Thank you + God bless,
-Andrew

Sorry, not quite sure what you are asking. At Lauds a commemoration of SS Eustace & Others which being a double excludes the Suffrage of the Saints.

I don't understand the
Divine Office and currently learning via internet.
Thank you for answering my question and for all of your hard work + efforts
God bless.
-Andrew