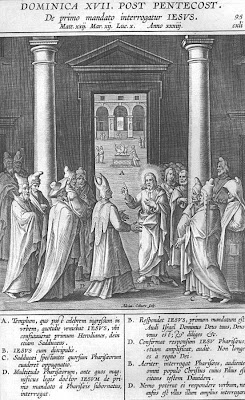 The seventeenth Sunday after Pentecost is of semi-double rite and its liturgical colour is green. This year it is the fifth Sunday of September. The Gospel pericopes at Mattins and Mass come from the twenty-second chapter of St. Matthew's Gospel and have the Pharisees asking the LORD what is the greatest commandment.

As Vespers yesterday afternoon the antiphons and psalms of Saturday were sung. The Office hymn was Jam sol recedit igneus. The antiphon on the Magnificat was Domine, Rex omnipotens for the Saturday before the fifth Sunday of September. After the collect of the Sunday a commemoration was sung of SS Cosmas & Damian followed by the Suffrage of the Saints. At Compline the Dominical preces were sung.

At Mattins the invitatory is Dominum qui fecit nos and the Office hymn is Nocte surgentes. In the first nocturn the lessons are the Incipit of the Book of Esther. In the second nocturn the lessons are taken from St. Ambrose's Book of Offices. In the third nocturn the homily is from St. Chrysostom on St. Matthew's Gospel. The Te Deum is sung. At Lauds the Office hymn is Ecce jam noctis. After the collect of the Sunday, a commemoration of SS Cosmas & Damina is sung followed by the Suffrage of the Saints.

Mass is sung after Terce. The Gloria is sung, the second collect is of SS Cosmas & Damian, the third collect is A cunctis. The Creed is sung and the preface of the Blessed Trinity.

At Vespers the antiphons and psalms of Sunday (109, 110, 111, 112 & 113) are sung. The Office hymn is Lucis creator. After the collect of the Sunday commemorations are sung of the following feast of St. Wenceslaus and of SS Cosmas & Damian followed by the Suffrage of the Saints. At Compline the Dominical preces are sung.