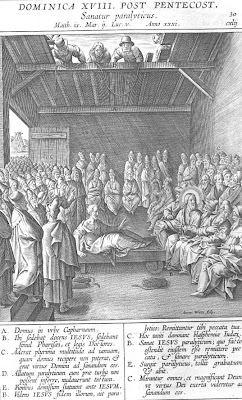 The eighteenth Sunday after Pentecost is of semi-double rite and its liturgical colour is green. This year it is the first Sunday of October. The Gospel pericopes from St. Matthew relate the healing of a paralytic, both by being forgiven his sins and physically healed by the LORD.

At Vespers yesterday afternoon the antiphons and psalms of Saturday were sung. The Office hymn was Jam sol recedit igneus. The antiphon on the Magnifcat was Adaperiat Dominus for the Saturday before the first Sunday of October. After the collect of the Sunday commemorations were sung of the preceding Office of St. Teresa of the Child Jesus and of St. Francis of Assisi. The Suffrage of the Saints was omitted as were the Dominical preces at Compline.

Mass is sung after Terce. The Gloria is sung, the second collect is of St. Francis. Today there is no third collect. The Creed is sung as is the preface of the Blessed Trinity.

Prior to the reform of 1911-13 the first Sunday in October was the feast of the Most Holy Rosary of the BVM. All Masses, except the Conventual Mass (although a Double of the Second Class the feast had special privileges), may be of the feast. The Mass Gaudeamus is sung in white vestments. The Gloria is sung, the second collect is of the Sunday and the third collect is of St. Francis. The Creed is sung, the preface is of the Blessed Virgin and the last Gospel is of the Sunday.

Vespers are of the Sunday. The Office hymn is Lucis creator. After the collect of the Sunday commemorations are sung of the following Office of SS Placid & Companions and of St. Francis. The Suffrage is omitted as are the Dominical preces at Compline.

What determines the number of collects? Some ordinary Sundays there are two added and others only one.
Drew

I read your series of articles that you published in July 2012 concerning the 1962 MR with great enthusiasm. I realize it has been a long time since they were written, but are there any plans to continue the series into Part 2, with the differences in the 1962 celebration of mass? I would be very interested in learning more.

@Drew: The number of Collects is determined by the rite and the solemnity of the Office. In Masses of semidouble or simple rite, outside of Passiontide and certain Octaves, 2 additional Collects are added, according to the Season. The Second of these prayers is omitted if a Commemoration has to be made, and both are omitted should 2 Commemorations occur.

So, if a "green Sunday" - which is semidouble, occurs when a Commmemoration of a Saint(s) Feast is of a Double, there would be only 2 Collects: the Sunday, and the Saint(s) of the Day.

If that Saint is of a semidouble, the Collects would be of the Sunday, the Saint(s) of the day, and then the first of the 2 from the Season.

@Drew, +DM has given an excellent summary above. Basically semi-double green Sundays ordinarily have three orations except Sundays within Octaves which just have a commemoration of the Octave (and any other occurring feasts). After 1911-13 with Additiones & Variationes, VI on a 'green' Sunday when a double feast is commemorated (before 1911-13 the feast would have been celebrated and the Sunday commemorated) the prayers of the season e.g. A cunctis etc are omitted along with the Dominical preces at Prime and Compline and Quicumque.

@Alfred, Yes there will be a continuation, hopefully soon.

Is there a reason the Ordo does not give St. John Leonard on October 9?

Yes, as the Ordo is follows the 1939 Missale Romanum St John Leonardi was not in the Universal Calendar.

It seems St. John Leonard was made a saint in 1938 but was not elevated to the Universal Kalendar until the early 40s.

Yes, that is correct.

Thanks very much for your explanation. It had not occurred to me that although St. John Leonard was canonized by Pius XI he was not yet on the universal calendar.

In the Ordo I see that "Fidelium" is not prescribed until October 23, as opposed to October 12 (when there is no feast). Is this because October 11 is a Sunday this year (and feast of the Divine Maternity), so that October 12 is a "resumed Sunday" rather than a standard-issue feria?

Indeed that is the case. Fidelium is excluded when the Mass of the preceding Sunday has to be resumed, and that Mass is resumed on the first ferial day, or first simple feast, or Saturday Office of the BVM, or day within a common octave (in that order of preference) of the following week. So this year Monday 12th, being a ferial day, has the resumed Sunday Mass and the first day Fidelium can be said moves to near the end of the Month.