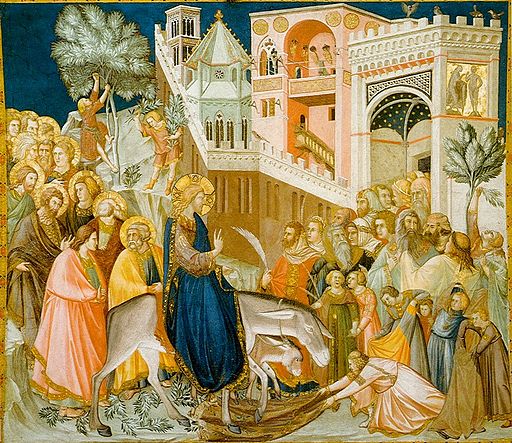 Entry of Christ into Jerusalem, Pietro Lorenzetti, Wikipedia
Palm Sunday is a privileged semi-double Sunday of the first class and the sixth, and last, Sunday in Lent. No feast can take its place. In the Roman rite Palm Sunday, in its traditional form, is a truly magnificent day with the splendid solemn blessing of Palms and Procession before the principle Mass. The liturgical colour, throughout, is violet.  The liturgy of the day, particularly the ceremonies of the Palms and Mass symbolically prefigure the events of the week ahead.
The Office began, as usual in Lent, with Vespers yesterday morning. Vespers were sung with the antiphons and psalms of Saturday. The chapter, from Philippians, Fratres: Hoc enim senite, was proper to the Sunday. The Office hymm was Vexilla regis. The antiphon on the Magnificat, Pater juste, and the collect were both proper to Palm Sunday. After the collect of the Sunday commemorations were sung of the preceding Office of St. John Damascene and of St. John Capistran. At Compline, sung at the usual time, the Dominical preces were omitted.
At Mattins there are the usual three nocturns. The antiphons and psalms at all the nocturns are those appointed for Sundays. In the first nocturn the lessons are from the book of Jeremiah the Prophet. In the second nocturn the lessons are a sermon of St. Leo the Great and in the third a homily of St. Ambrose. The Te Deum is not sung but a ninth responsory, Circumdederunt me viri mendaces etc., is sung in its place. At Lauds the proper antiphons, Dominus Deus etc., are sung with the second scheme of Psalms  (50, 117, 62, Benedictus es, 148). The chapter is proper to the Sunday and the Office hymn is Lustra sex. After the collect of the Sunday a commemoration is sung of St. John Capistran.

At Prime and the Hours the antiphons are proper to the Sunday, Pueri Hebraeorum etc. At Prime psalms 92, 99 (displaced from Lauds) and the first two divisi of Ps. 118 are sung. The Dominical preces are omitted and the short lesson is Faciem meam. At Terce the antiphon is Pueri Hebraeorum vestimenta .  Both Pueri antiphons will be heard again shortly afterwards at the distribution of the Palms.

The beginning of the Blessing of Palms, Missale Romanum, Paris, 1572, B.L. 1475bb15 - the very first Tridentine Missal this writer ever held and studied at the British Library in the 1990s
The Asperges ceremony takes place after Terce and before the principal Mass as usual. The deacon and subdeacon wear violet folded chasubles. Being in Passiontide the Lesser Doxology is omitted after the verse of the Miserere. After the Asperges the celebrant and ministers proceed to the Epistle corner and begin the solemn blessing of Palms whilst the choir sing the antiphon Hosanna fili David, O Rex Israel etc. The rubrics direct that the Palms are to be blessed at the Epistle side of the altar.
As the choir sing the antiphon Hosanna Filio David  the celebrant reads it in a low voice and then chant the collect Deus, quim diligere which is then followed by the reading of an Epistle and Gospel of the blessing. The normal ceremonies of High Mass are followed. The subdeacon removes his folded chasuble to sing the Epistle taken from the Book of Exodus. Following the Epistle two texts are given, Collegerunt pontifices and In monte Oliveti (the latter will appear again as a responsory during the Triduum) to be sung as a 'gradual', both may be sung. 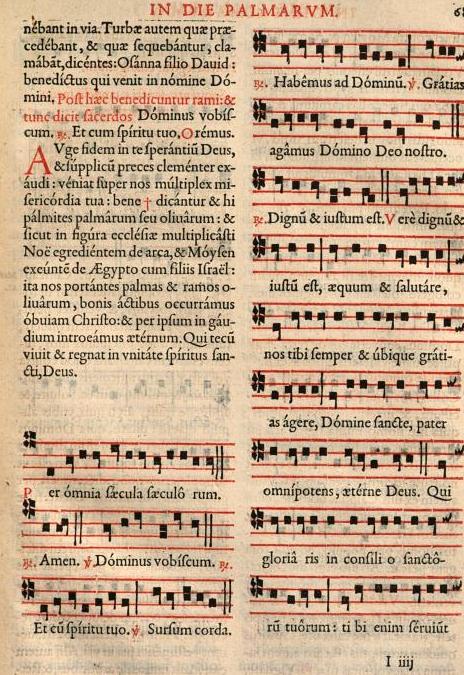 O God, who, by the wonderful order of Thy disposition, hast been pleased to manifest the dispensation of our salvation even from things insensible: grant, we beseech Thee, that the devout hearts of Thy faithful may understand to their benefit what is mystically signified by the fact that on this day the multitude, taught by a heavenly illumination, went forth to meet their Redeemer, and strewed branches of palms and olive at His feet. The branches of palms, therefore, represent His triumphs over the prince of death; and the branches of olive proclaim, in a manner, the coming of a spiritual unction. For that pious multitude understood that these things were then prefigured; that our Redeemer, compassionating human miseries, was about to fight with the prince of death for the life of the whole world, and, by dying, to triumph. For which cause they dutifully ministered such things as signified in Him the triumphs of victory and the richness of mercy. And we also, with full faith, retaining this as done and signified, humbly beseech Thee, O holy Lord, Father almighty, everlasting God, through the same Jesus Christ our Lord, that in Him and through Him, whose members Thou hast been pleased to make us, we may become victorious over the empire of death, and may deserve to be partakers of His glorious Resurrection.

The celebrant then puts on incense and blesses it. The Palms are then sprinkled with lustral water, the celebrant saying in a low voice Asperges me etc, and then censed. Another collect, Deus, qui Filium is then sung. The celebrant then receives his Palm from the senior canon present. If no other priest is present the celebrant kneels and takes the Palm from the of the altar, kisses it then passes it to the subdeacon who places it again on the mensa. The celebrant then gives Palms to the deacon and subdeacon and other ministers and then the people. The Palm is kissed first and then the celebrant's hand. During the distribution the antiphons Pueri Hebraeorum and Pueri Hebraeorum vestimenta are sung. After the distribution the celebrant and ministers go back to the altar, bow to the Cross and then go to the Epistle corner where the celebrant's hands are washed. Then, at the missal, he sings the collect Omnipotens sempiterne. 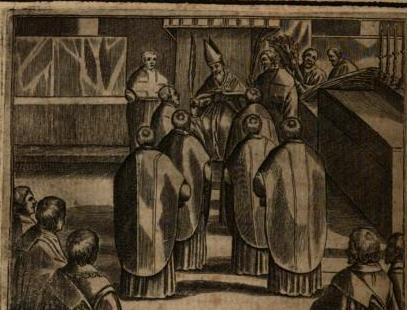 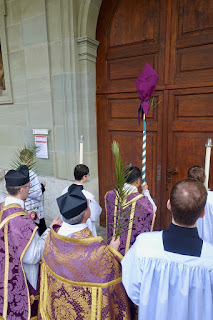 The celebrant removes his cope and dons his chasuble. The preparatory prayers are said but the psalm Judica me is omitted being in Passiontide. The introit is Domine, ne longe etc. There is no Gloria. Psalm 21 is sung in its entirety as a Tract. The major difference from any other Sunday is singing of the Passion according to St. Matthew by three additional deacons of the Passion. The text of the Passion is Matthew 26: 1-75; 27: 1-66. After the singing of the Passion the last part, Altera autem die...lapidem cum custodibus, is sung with the ceremonies of a Gospel by the deacon of the Mass (having removed his folded chasuble etc) to a most haunting tone.

At Vespers the antiphons and psalms of Sunday are sung. The chapter is Hoc enim senite and the Office hymn is Vexilla regis. After the collect of the Sunday a commemoration is sung of St. John Capistran. At Compline the Dominical preces are omitted.

In the 'liturgical books of 1962' Palm Sunday has been given a radical 'makeover' to the extent that the official title of the day has even been changed to 'Second Sunday of the Passion or Palm Sunday'. Mattins is cut down to the usual single nocturn of three lessons and there are no commemorations at Lauds and Vespers. At Prime the psalmody is Ps. 53, 118(i) & 118(ii) as on feasts. At the massively truncated blessing of Palms and at Mass the ministers wear red dalmatic and tunicle instead of folded chasubles, the prayers at the foot of the altar are omitted, the Passion is shortened, the dismissal is Ite, missa est and the last Gospel is omitted. (In Masses without the blessing of Palms the Gospel for the blessing Cum appropinquasset Jesus is read as a proper last Gospel, the only surviving proper last Gospel in the 'liturgical books of 1962').  For those interested in the depressing catalogue of destruction of what turned a splendid day into a miserable thing an earlier post here gives the grim details.  The image below shows a typical blessing of Palms in the reformed rite, actually following its rubrics, with the palms on a table versus populum etc. 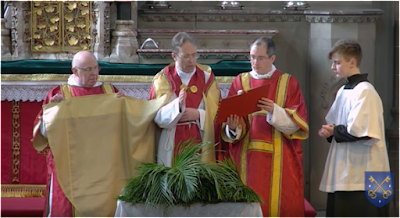 Image: Screen shot from a video of the FSSP, Warrington, 2019
Posted by Rubricarius at 01:00

The FSSP in Krakow have put up a series of videos of Palm Sunday and the Triduum in the pre-1955 rite.

I had the great joy of celebrating a Missa Cantata in this church in 2017, as well as Low Masess each day in the Wawel Cathedral. Judging from the age and the size of the congregations, and from the age of the sacred ministers in these videos, in Poland at least, tradition is alive and is young.

In the pontifical version of the Good Friday ceremony (as seen here both with Bishop Dolan and Cardinal Burke), what is the reason for the pontiff sitting up on the predella facing the Gospel side?

@Peter,
I do not know but the rubrics prescribe this unusual arrangement which is particular to this celebration alone.