The Mass of the Pre-Sanctified 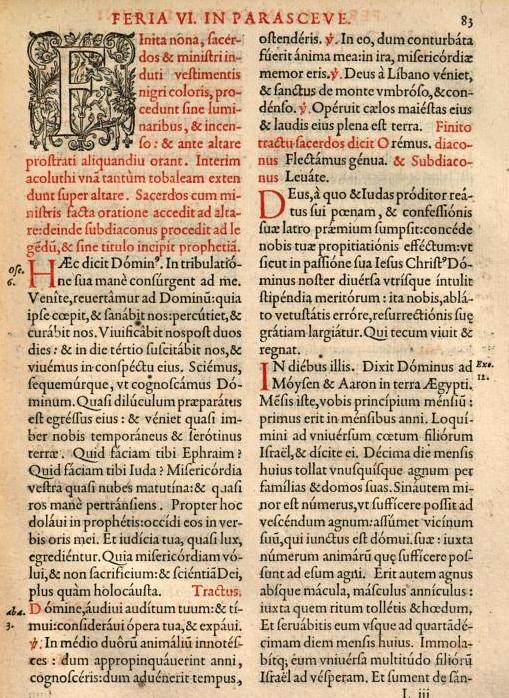 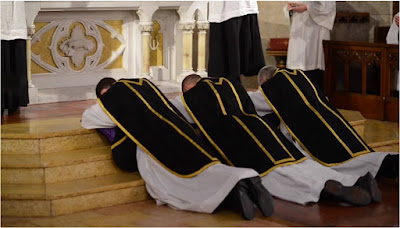 'Solemn Mass' celebration of Mass of the Pre-Sanctified, FSSP 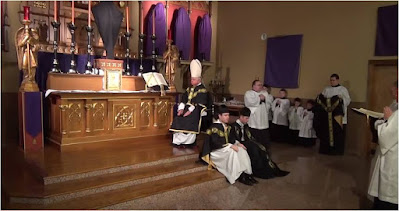 'Mass at the Faldstool' celebration, SGG
The faldstool is not in its normal place but on the footpace of the altar. The subdeacon has removed his black folded chasuble and is chanting the lesson. The ministers sit on the altar steps. 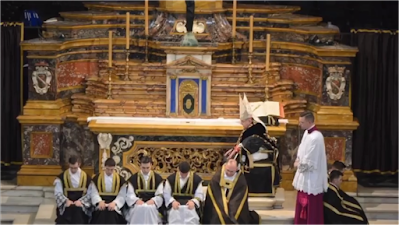 'Pontifical Mass at the Throne' form of celebration The celebrant does not use a throne this day but a faldstool on the footpace of the altar.  Note the deacon and subdeacon as well as assistant deacons wear black folded chasubles. 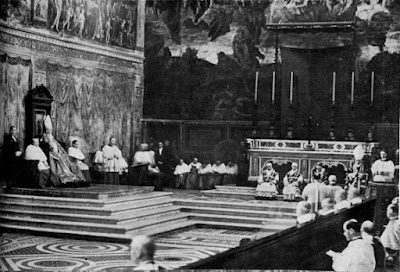 Celebration of the Mass of the Pre-Sanctifed in the presence of the Pope (Pius XI), 1936
The Pope did not celebrate on Good Friday but presided wearing a red cope, paeony-coloured stole and cloth of silver mitre. The Cardinal-celebrant (wearing a simple white mitre), Cardinal Pacelli, on the faldstool is the man who would destroy so much of liturgical tradition in the reforms of the 1950s. Note the Cardinal-deacon and Cardinal-Subdeacon in black folded chasubles seated on the altar steps.
Posted by Rubricarius at 13:51

Exactly.
CMRI are mistaken regarding their adherence to Papa Pacelli's so called reforms.
He also destroyed the after midnight Holy Communion fast.
Pius XII is the first wave of the
Novus Ordo.

These photos are great. Thanks!

And 100% true. Pope Pius XII was the first liturgical destroyer.

What is the reason for the prelate sitting at a faldstool facing the Gospel side?

I have no idea but all the authors are clear on the matter.