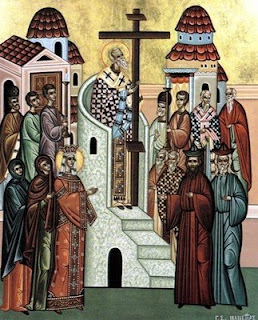 Today's feast of the Exaltation of the Holy Cross is of greater-double rite. Interestingly we have received several emails asking whether the Ordo contained a mistake by placing a greater-double feast on a Sunday. Ordinarily according ot the rubrics a semi-double Sunday is preferred to a greater-double. However, greater-doubles that are feasts of the Lord do take precedence in both occurence and concurrence.

The feast commences with first Vespers with the beautiful and haunting Vexilla Regis as the hymn. Perhaps this hymn is the most stunning of all the Office hymns? It is certainly this writer's favourite. The Sunday is commemorated at Vespers with the Magnificat antiphon Ne reminiscaris of the Saturday before the 3rd Sunday of September and the collect for the XVIII Sunday after Pentecost.

Mattins has nine lessons, the ninth lesson being that of the commemorated Sunday. The Sunday is also commemorated at Lauds and at Mass. At Mass the Gloria and Creed are sung and instead of In principio the last Gospel is that of the Sunday, Ascendens Jesus in naviculam.

Vespers are of the following feast of the Seven Dolours of the Blessed Virgin Mary with a commemoration of the Exalation of the Holy Cross and of the Sunday.
Posted by Rubricarius at 07:00