The Liturgy of a Lenten Ferial Day 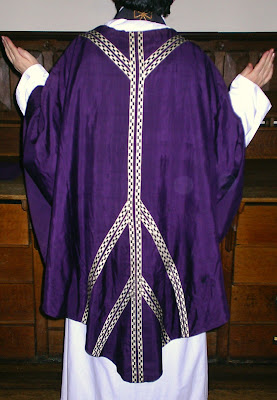 Today, Friday in the Second Week of Lent, will be used as an example to look in more detail at the structure of the Lenten liturgy. It may be of interest to compare with the Tridentine praxis, where the temporal cycle, this year, is now in synchrony between the Gregorian and Julian Calendars (although, of course, the Sanctorale is not).

At Mattins the invitatory, as on other ferial days and Sundays in the first four weeks of Lent, is Non sit vobis. The hymn is Ex more docti. Mattins has one nocturn of nine psalms and three lessons. As the rite is simple the antiphons (those given with their psalms in the Breviary at Feria Sexta Ad Matutinum) are not doubled. The nine psalms and antiphons are sung straight through ignoring the divisions marked for three nocturns for when an Office of nine lessons is sung. After the ninth antiphon is repeated the versicle Scapulis suis obumbrabit tibi with its response Et sub pennis ejus sperabis. The Pater noster is then said, sub secreto, followed by Et ne nos in inducas in tentationem and the response Sed libera nos a malo. The Absolution for Fridays is Ipsius pietas etc. The first reader (who as it is a Gospel to be read must be in deacon's orders or above) asks for a blessing with Jube, domne benedicere and the Officiant respond with Evangelica lectio etc. The reader chants the Gospel fragment from St. Matthew and then continues with Homilia sancti Ambrosi Episcopi. Plerique varias significantiones etc until its end concluding with Tu autem Domine miserere. The Choir respond Deo gratias. The first responsory Dum exiret Jacob etc is then sung. Then the second reader asks for a blessing, the Officiant sings Divinum auxillium etc and the reader then chants the second lesson, Unde bene secundum etc. The second responsory Si Dominus, Deus meus is then sung. The Officiant receives the blessing Ad societatem from the senior member of Choir and sings the third lesson, Aedificavit turrim etc. After the third lesson the responsory Erit mihi Dominus is sung.

Lauds follow immediately. The antiphons and psalms given in the Breviary Feria Sexta ad Laudes II are used (Pss. 50, 142, 84, Canticle of Habacuc, 147). After the chapter Clama, ne cesses etc the hymn O sol salutis is sung followed by the versicle Angelis suis mandavit de te and its response Ut custodiant te in omnibus viis tuis. The antiphon on the Benedictus is found in the Breviary with the Mattins lessons for the Friday in the Second Week of Lent. Only the fragment Malos male perdet is sung before the Canticle. The entire antiphon is then repeated. The the Choir kneels and the ferial preces are chanted. These begin with Kyrie eleison, Christe eleison, Kyrie eleison, the the Pater noster chanted aloud by the Officiant alone, followed by a series of intercessions in format of versicles and responses. The collect of the day is then sung followed by the Suffrage of the Saints.

At Prime, again from the ferial psalter, the psalm displaced from Lauds by the Miserere, Ps. 98 is added after the three psalms (or rather three psalms fragments). The ferial chapter Pacem et veritatem is sung and then both the Dominical and ferial preces are sung, the Choir kneeling. Terce, Sext and None are all from the ferial psalter with the antiphons and chapters indicated in the Breviary for Lent. The short set of ferial preces are sung, again kneeling, at each of these Hours.

After Mass the liturgical mood changes somewhat and first Vespers of SS Perpetua and Felicity are sung this morning. The altar is vested in red. Although the antiphons and psalms are taken from the Breviary Feria Sexta ad Vesperas the antiphons are sung entire before and after each psalm. The chapter is Confitebor tibi from the Common of Non-Virgins from which the hymn, Fortem virili pectore, also comes. The antiphon on the Magnificat, Istarum est enim is sung in its entirety both before and after the Canticle. After the collect of the feast the Lenten feria is commemorated with the antiphon Quaeretes eum tenere etc, the versicle Angelis suis etc and the collect Da, quaesumus Domine. At the usual time Compline the psalms again come from the ferial psalter but the preces are not sung because of the double rank feast.

In the 'liturgical books of 1962' all antiphons are doubled. At Lauds the Suffrage of the Saints is omitted. There are neither Dominical or ferial preces at Prime, nor a fourth psalm and the chapter is Regi saeculorum. The ferial preces are not sung at the other Little Hours. At Mass the ministers wear dalmatic and tunicle. There is only one collect sung. The dismissal is Ite, missa est. Vespers are sung as at other times of the year. Vespers are ferial, the ferial preces are said but there is neither Suffrage or even a commemoration of SS Perpetual and Felicity.

Image: one of two extant violet chasubles designed and worn, possibly in Lent, by the great Adrian Fortescue DD.

What is properly done about the Gospel incipit in a choir of laics or minor clerics?

An excellent question. Having discussed it with the two most liturgically erudite people I know over the weekend I an not convinced there is an 'official' answer.

The concensus is that the senior most person read it whether they are a subdeacon, cleric in minor orders, tonsured cleric or a layman, but without any solemnity.

Otherwise without a deacon it would not be possible to have Mattins in commmon. This of course does highlight the way the Office was treated as an obligation and not sublime liturgical worship. I have yet to find the equivalent of rubrics for a 'Reader Service' as one would get in the Eastern rites.

I will consult Martinucci, Bauldry etc next week but doubt they will throw much light on the question.

I am grateful for your efforts. My own researches have turned up nothing as well, and one of my learned confreres agrees that the issue was never authoritatively decided. Obviously this must have been an issue in nuns' choirs, and so perhaps some insight could be gleaned from what their usual praxis was. Certainly the answer of the Carthusianesses is well known, but something different must have obtained amongst the Benedictines, etc.

If I might ask, what does your correspondent refer to when he talks about omitting any solemnity with respect to the Gospel pericope at Matins? I am aware of none in the secular rite.

It is true, as you point out, that we can know almost nothing about this because of the prevailing post-Tridentine view of the Office as legal obligation rather than liturgy. Too, I think it's worth noting that no one would ever have envisioned a need for the laity to take up the public celebration of the Office on their own, as the clergy seemingly can't be bothered in most places.

But I will of course be grateful for whatever you might turn up.