A re-ordered Sanctuary of the 1950s 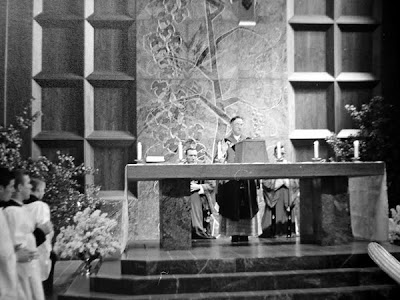 Purusing the Web after reading Arthur Crumly's post on the Liturgical Movement and reform I found the following interesting site of The Liturgical Institute detailing history of the American movement and biographical information about some of its members.

The photograph above comes from the pages noting the contribution of Reynold Hillenbrand at the church of the Sacred Heart, Hubbard's Woods, Illinois. The caption explaining the photograph reads:

'Hillenbrand is shown at left [the photograph is to the left of the caption on the website] in Sacred Heart Church after the 1957 parish renovation. As a pioneer of liturgical reform, Hillenbrand sought permission to say Mass “facing the people” in the late 1950s, shown here in the short interim period when tabernacles were still placed on altars.'

Hillenbrand's church had been renovated/re-ordered/ changed in line with 1950s thinking on matters liturgical. Below is a 'before' photograph followed by an 'after' one with text from the website between them. 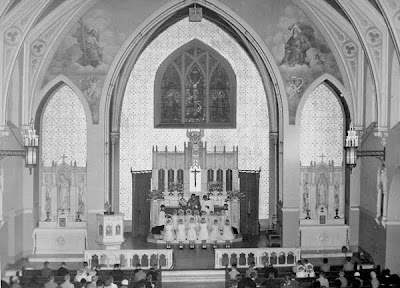 'The 1957 renovation of Sacred Heart Church was Hillenbrand’s most signiﬁcant intervention in the parish’s physical plant. Hillenbrand knew well the artistic leaders of the Liturgical Movement, and was himself a member of the Board of Directors of Liturgical Arts magazine. Hillenbrand was greatly inﬂuenced by the architectural standards of the day, which saw the altar, freestanding tabernacle, cruciﬁx and rear wall hanging to constitute the “liturgical altar.” His renovation, which did not occur without signiﬁcant resistance on the part of some parishioners, reveals the somewhat radical inﬂuence of the dominant architectural establishment, which considered historical styles “fakery” and preferred singularity of image to multiplicity. The Gothic high altar was given to St. Mary’s Church in Fremont Center, Illinois (where it remains today) and side altars were removed so as to have only one altar in the church. The cruciﬁx and sculptures of the Blessed Virgin and Saint Joseph were completed by Ivan Mestrovic. Hillenbrand’s signature intervention was the “Vine and Branches” sculpture by Joseph O’Connell on the rear wall of the sanctuary, a reminder to the people of their status as Mystical Body of Christ. The baptistery was moved to the front of the church to reinforce the connection between baptism and Eucharist. While Hillenbrand’s renovation was certainly foreign to the architectural lines of the existing church, it nonetheless preserved the use of high quality marble for the altar and sanctuary and the highest level of craft, reiterating the importance of the sacred building and sacral action.' 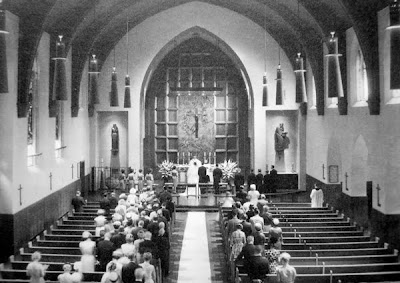 Yet another example of what was happening during the 1950s yet why is it on so many 'Traddy' blogs we read over and over again about the unchanging 'TLM', the 'wicked Council' and 'no reform before Paul VI'?
Posted by Rubricarius at 08:02

I can't decide which is worse: the Candyland Gothic of the before, or the aliturgical after. Neither is very uplifting.

Colin Stephenson also mentions that he witnessed floppy vestments made out of string, rose-bowl chalices and a candle-free altar even before WWII.

I agree. Whilt real Gothic is wonderful somehow the Victorian and twentieth century imitations never really work for me, at least with a couple of notable exceptions.

There is nothing wrong with noble simplicity if it is liturgical i.e. the Eucharist celebrated facing East etc.

It strikes me that Fr. Hillenbrand had some sense of what was wrong but didn't really know what was right either.

I trust Colin Stephenson had seen string chasubles and candle free altars in French and Italian churches and not on a visit to a certain Wren church on Lower Thames Street.

Not the best example of gothic revival, I grant you, but if church buildings don't go down the historical revival style route, what are they left with? Modern culture is anti-Christian to its core. It has produced little of note that acknowledges the transcendent. So it is incapable of producing architecture that speaks a "Catholic language".
Steve

IMHO that works rather well in its revival forms - St. John's in Newbury, Bershire UK being a fine example that comes to mind.

Rubricarius,
I agree. I'm not familiar with St. John's in Newbury - I'll have to visit if I'm ever near there. Generally the Victorians have had a bad press over church architecture, although opinion has warmed to them in recent years. I'm a fan of revivalist styles, most of all Gothic and Romanesque. I'm one with Pugin on that. The thing is it's got to be done well (hasn't everything?!), otherwise it can descend into what Ex-Fide calls "Candyland". Still, I'd rather that than the sterility of the modernist and post-modernist styles. If you've ever been in Clifton Cathedral, you'll probably think it necessary to invent the doctrine of the "real absence"!

Do visit St. John's if you get the chance. It is rather fine (but excuse the ceiling..)

Gothic Revival has to be very well done to work and very, very, expensive to execute. Perhaps St. Cyprian, Clarence Gate, is one of the finest examples? Pugin's wonderful St. Giles, Cheadle, another but could such examples be built today unless one had a massive budget?

My favourite church in this Realm, as regular blog readers will know, is Westminster Abbey but I do not think it could be built today.

Romanesque is cheaper and much easier to 'bring off'. If I were building a church I would choose that style and employ some Cypriot iconographers to paint frescoes to add to the internal decor.

I am afraid I have had the misfortune to visit Clifton Cathedral.

Notice in which church the congregation is full and is not.

Quite. As my much missed late friend Fr. Ronnie Silk used to say 'Run, run, to the hills and escape this nonsense'!

Notice also in the "after" picture that what congregation there is has gathered nearest the aisle, presumably to afford the quickest exit!
Steve

What a philistine and vandal.

A product of his age I suspect.

Whilst the 1950s was generally more tasteful a decade than the one that followed it (think Grace Kelly in comparison to the Beatles) still rather grim.

To anonymous at 12:48 It seems that the earlier photograph shows first Communicants, perhaps the reason for a larger congregation.

The liturgical reform was going on way before Vatican II. However, Vatican II brought forth the official version directly from Rome. The Novus Ordo is an abomination and must be avoided at all costs. One day, the only place you will see the Novus Ordo Missae is in the museum of horrors!!!

Thank you for your comment. The changes of 1940s and 1950s came straight out of Rome too - most of them the result of a special commission the pope had established 1n 1947 to carry out a general liturgical reform.

You cannot compare the changes from the 1940s and 50s to the changes in the 60s. The Novus Ordo is a radical departure from the old rite.

What happened in 1911 and 1955 were also radical departures from the rite.

In addition many of the NO changes, particularly those relating to the Mass rite had been planned in the 1950s and had started to be implemented with the Holy Week revision and in the Rubricarum instructum changes.

I guess I just don't get it. Isn't church for worship of God, not the decorations?

At its most simple we worship God and the entire worshipping community did that, together, facing East. Having part of that community separate itself by a barrier and turn in to face the rest of the community destroys that model.