The Assumption of the Mother of God 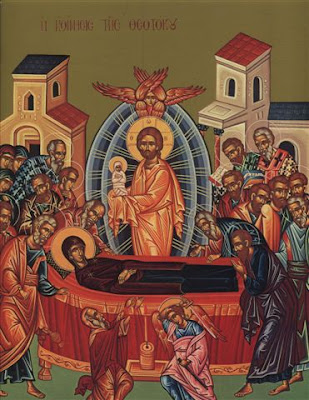 The feast of the Assumption is a Double of the First Class with an Octave. The feast also appears as the Dormition of the Mother of God in some earlier liturgical texts and is known by that name in the East to this day. The twelfth Sunday after Pentecost (the third Sunday of August) is commemorated at Vespers, Mattins, Lauds and Mass.

At Vespers yesterday afternoon the antiphons proper to the feast, Assumpta est Maria in caelum etc were sung with the psalms from the Common of the BVM. The Office hymn was the glorious Ave, maris stella. After the collect of the feast the Sunday was commemorated with the antiphon Omnis sapientia etc. Hymns of Iambic metre have the Doxology and tone in honour of the Incarnation.

At Mattins the invitatory is proper to the feast. In the first nocturn the antiphons Exaltata est etc are sung with psalms 8, 18 & 23. The lessons in the first nocturn, since the time of Pius V, are taken from the Incipit of the Canticle of Canticles, are particularly rich with vibrant, sensual, imagery:

Let him kiss me with the kiss of his mouth: for thy breasts are better than wine, smelling sweet of the best ointments. Thy name is as oil poured out: therfore young maidens have loved thee. Draw me: we will run after thee to the odour of thy ointments. The king hath brought me into his storerooms: we will be glad and rejoice in thee, remembering thy breasts more than wine: the righteous love thee. I am black but beautiful, O ye daughters of Jerusalem, as the tents of Cedar, as the curtains of Solomon.(1st lesson)

In the second nocturn the antiphons Specie tua etc are sung with psalms 44, 45 & 86. The lessons are from St. John Damascene's second discourse on the Dormition of the Virgin and again both exquisite and highly appropriate to the day:

"This day the holy and animated ark of the living God, she who conceived in her womb her Creator rests in the temple of the Lord, which was not made with hands. And her ancestor David leaps, and with him the Angels lead the dance, the
Archangels make celebration, the Virtues ascribe glory, the Principalities exult, the Powers rejoice together, the Dominations are joyful, the Thrones keep holiday, the Cherubim utter praise, the Seraphim proclaim her glory. This day the Eden of the new Adam receives the living Paradise, wherein the condemnation was made void, wherein the tree of life was planted, wherein our nakedness was covered." (4th lesson)

In the third nocturn the antiphons Gaude, Maria virgo etc are sung with psalms 95, 96 & 97. The homily on the Gospel fragment is from St. Augustine's 27th Sermon on the Words of the Lord. The ninth lesson is the homily of the commemorated Sunday from the writings of St. Bede.

At Lauds the antiphons Assumpta est Maria are sung with the Dominical psalms. After the collect of the feast a commemoration is sung of the Sunday.

At Prime the hymn is sung with the proper Doxology and tone. In the short responsory Qui natus es de Virgine is sung, both today and throughout the Octave, and the lectio brevis is In plateis. At the Hours the hymns are again sung with the Doxology and special tone.

Mass is celebrated after Terce. The Rituale gives a Blessing of Herbs for this day which takes place after the Asperges and immediately before Mass with Psalm 64, a series of versicles and responses, three collects, whose florid style, reminiscent of those for the Blessing of Palms, suggests a Gallican origin. The Mass formulary, Gaudeamus, is a particularly beautiful set of texts. The Gloria is sung, the second collect is of the Sunday. The Epistle is a sublime cento from the Book of Wisdom that also forms the chapters at the Office. The gradual Propter veritatem is very ancient. The Credo is sung , the preface that of the BVM and the last Gospel of the Sunday. The composer Nicholas Wilton has set one of the chant verses, Optimam partem (communion), to two delightful arrangements.

In the afternoon Second Vespers are sung with a commemorations of tomorrow's feast of St. Joachim, father of the BVM, and of the Sunday of August. Compline is again festal with the proper Doxology at Te lucis.

The 'the liturgical books of 1962' have seen considerable revision of the once beautiful feast from changes in 1960 and the introduction of novel texts in 1950. Vespers gets a new chapter, hymn and collect. At Mattins in the first nocturn the first lesson is taken from Genesis and then, curiously, the second and third from the former Epistle of St. Paul to the Corinthians. In the second nocturn the magnificent writing of St. Damascene are shortened by the inclusion of a sixth lesson from Pius XII's writings. The third nocturn has a homily of St. Peter Canisus on the new gospel pericope introduced in 1950. At Lauds there is a new chapter, a pedestrian and ugly hymn replacing O gloriosa virginum, and new collect. At Prime the lectio brevis is Dominus autem dirigat, of the season. At Prime and the Hours the tone of the hymns is that for greater feasts, not the Incarnation and the special Doxology is omitted. The 1950 mass is again banal and ugly compared with the ancient texts. The last Gospel of the Sunday is not read. At Vespers no commemoration is made of St. Joachim whose feast is celebrated tomorrow. The Octave was abolished in 1955.

Art: Icon from the Melkite tradition in Australia.
Posted by Rubricarius at 07:01

I hope that ''traditional'' churches that used Signum Magnum today followed the rubrics of '62 to the letter - if there's anything I hate more than '62 it's mixing and matching...

I just noticed that there is no commemoration of the Octave at Lauds on the feast of Saint Joachim. Are common octaves not commemorated when there is a II class feast?

No: days within a common octave are not commemorated on a D2Cl, days within privileged octaves are.