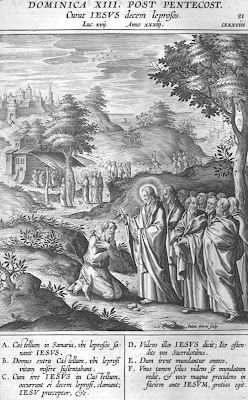 The thirteenth Sunday after Pentecost, this year the fourth Sunday of August, is of semi-double rite. Today is also the Octave Day of the Assumption of the Most Holy Mother of God. The Gospel pericopes from St. Luke's Gospel tell of the LORD and the ten lepers, only one of which thanked Him for being healed.

At Vespers yesterday the antiphons and psalms of Saturday were sung. The antiphon on the Magnificat was Sapientia for the Saturday before the fourth Sunday in August. After the collect of the Sunday commemorations were sung of the preceding Office of St. Jane Frances Fremiot de Chantal, of the Octave Day (with the antiphon from first Vespers of the feast, Virgo prudentissima) and of SS Timothy, Hippolytus and Symphorian. The Suffrage of the Saints was omitted at Vespers as were the Dominical preces at Compline because of the occurring double feast and Octave Day. Hymns of Iambic metre have the Doxology of the Incarnation as has happened throughout the Octave.

At Prime (Pss. 117, 118i & 118ii) both Quicumque and the Dominical preces are omitted due to the Octave Day. In the short responsory the versicle Qui natus es is sung, as it has been each day of the Octave.

Mass is sung after Terce. The Gloria is sung, the second collect is of the Octave Day, the third collect, although a Sunday within the Octave, is of SS. Timothy, Hippolytus and Symphorian. The Creed is sung and the preface is of the Holy Trinity. 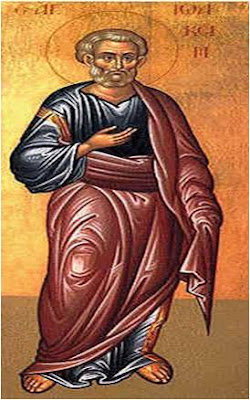 As today is also Sunday within the Octave one Mass, but not the Conventual Mass, may be celebrated of St. Joachim, Father of the BVM. Before the 1911-13 reform Sunday within the Octave of the Assumption was the day for the celebration of the feast of St. Joachim. Following the reform St. Joachim was permanently transferred to August 16th. However the Mass of certain feasts that were previously celebrated on certain Sundays, including that of St. Joachim, was still able to be celebrated on those Sundays. The Mass Dispersit is sung in white vestments. The Gloria is sung, the second collect is of the Sunday, the third of the Octave Day (in said Masses a fourth collect of SS. Timothy, Hippolytus and Symphorian is added). The Creed is sung, the Preface is of the Holy Trinity and the last Gospel is of the Sunday.

Vespers are of the Sunday. After the collect of the Sunday commemorations are sung of the following feast of St. Philip Benizi and of the Octave Day.

My breviary (Ratisbonae, 1946) has the feast of the Immaculate Heart of Mary as a double of the second class. Wouldn't that supersede the Sunday?
John

St Gertrude the Great Church and their friends will be in white today. Their wall calendar prescribes the feast of the Immaculate Heart of Mary & the comm. of Sunday and feast:no mention of the Octave of the Assumption. Will you comment,please ? Alan Robinson

Where can one order this calendar?

The Ordo follows the Kalendar found in the editio quinta post typicam of the Missale Romanum, published in 1939.

The Immaculate Heart feast entered the Universal Kalendar on 4 May 1944. It would, as a D2Cl outrank a 'green' Sunday. The same arrangement as on 25 July would apply.


The Compilator Emeritus has very strong views on the placing of feasts on Octave Days. His views, surprisingly, appear to have been shared by some on the Pian Commission as a note in the Kalendar publication suggests removing the Immaculate Heart from the Octave Day. In fact the main document, #174, proposed May becoming a depositing ground for Marian feasts with five in the month, the Immaculate Heart being on the 15th and Mediatrix of All Graces on 31st. Of course, others were not keen on Octaves at all... With the Paul VI revision May 31st became the Visitation, the Immaculate Heart was moved to the Saturday after the Sacred Heart, and August 22nd became the Queenship of the BVM (a 1954 entry to the Kalendar).

Peter: if you search for 'St. Gertrude the Great Ohio' you will be able to contact them an order a wall calendar.

St Gertrude the Great Church site will give the address, then, I suggest you e mail them and ask for one; probably reduced by now, almost September. I usually send some dollars in cash notes bought from a bank and cheaper than other methods.The calendars are good but the pictures are of very variable quality. (but each to his own !) Alan Robinson

Thank you Rubricarius for noting when the feast entered the calendar. I guess I could have checked with an earlier publication. But it's just easier to use what I have at hand.
John