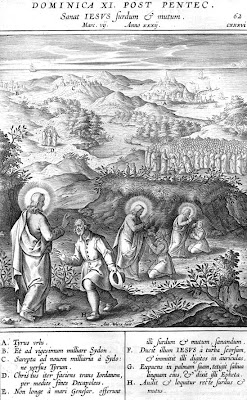 The eleventh Sunday after Pentecost, and the second Sunday of August, is of semi-double rite and its liturgical colour green. The Gospel pericopes from St. Mark contain the account of the LORD healing a deaf and dumb man with His spittle (c.f. rite of baptism).

At Vespers yesterday the antiphons and psalms of Saturday were sung. The antiphon on the Magnificat was Ego te in altissimis for the Saturday before the second Sunday in August. After the collect of the Sunday commemorations were sung of the preceding Office of St. Cajetan and of SS. Cyriacus, Largus and Smaragdus. The Suffrage of the Saints was omitted as were the Dominical preces at Compline because of the occurring double feasts.

At Mattins there are the usual three nocturns. The invitatory and hymn are as sung on previous 'green' Sundays. In the first nocturn the lessons are the Incipit of the Book of Ecclesiastes. In the second nocturn the lessons are from a sermon of St. Chysostom. In the third nocturn a homily from St. Gregory on St. Mark's Gospel. At Lauds a commemoration is sung of SS. Cyriacus, Largus and Smaragdus followed by the Suffrage of the Saints.

Mass is sung after Terce. The Gloria is sung, the second collect is of SS. Cyriacus, Largus and Smaradgus, the third collect is A cunctis. The Creed is sung and the preface is of the Holy Trinity.

Vespers are of the Sunday. After the collect of the Sunday commemorations are sung of the following feast of St. John Mary Vianney, SS Cyriacus, Largus and Smaragdus and St. Romanus. The Suffrage of the Saints is omitted as are the Dominical preces at Compline due to the occurring double feast.

Happy feast to the blog and press for today ! Was this the day of your founding ?
Alan Robinson