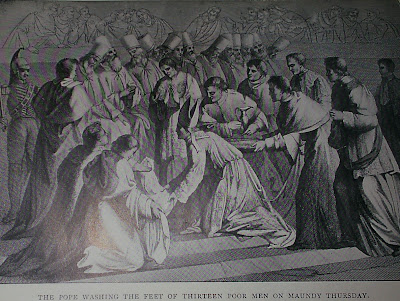 In the afternoon the Mandatum ceremony takes place. Dr. Glover never celebrated this so there are no photographs from Durham. However, the above is taken from Herbert Thurston's 'Lent and Holy Week'. The drawing shows the pope washing the feet of thirteen poor men on Mandy Thursday. 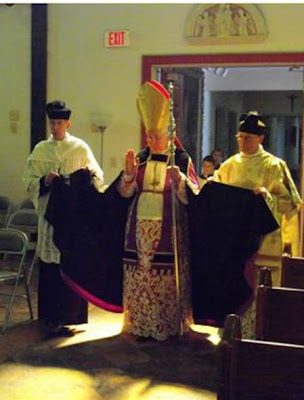 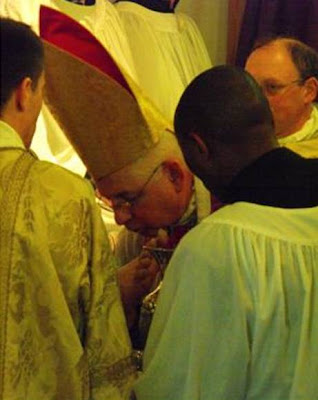 The Roman authors mention that the feet of thirteen poor men are washed and that after the service the men are given a good dinner, new clothes and some money. This admirable tradition of course continues with Our Sovereign Lady, Her Majesty The Queen, distributing the Royal Maundy Money. This Mandy Thursday Her Majesty will distribute the Maundy Money at the magnificent Collegiate Church of St. Peter, Westminster - aka Westminster Abbey. Some details of the service may be found here and here. Although HM The Queen no longer washes any feet I understand the Lord Almoner still wears an ceremonial apron as a vestigial reminder of when feet were washed. May the good Lord grant to Her Majesty and Her family a blessed Pascha!

In the 'liturgical books of 1962' the Mandatum normally takes place after the Gospel of the novel evening Mass. The feet of twelve men, not thirteen are washed but the feet are no longer kissed. The antiphon Benedicta sit sancta Trinitas is omitted. After the Washing of the feet the celebrant no longer returns to the Missal at the Epistle corner for the versicles and prayer Adesto but sings them before the altar in plano.
Posted by Rubricarius at 14:30

Email ThisBlogThis!Share to TwitterShare to FacebookShare to Pinterest
Labels: The Triduum

Unless I am mistaken, I believe for a simple priest he is dressed in white.

I'll have to double check in the Missal.

Fortescue has the celebrant in violet. The strange thing is why have ministers in white? Violet is the colour of the day until after Vespers with white beind the exception for the Mass.