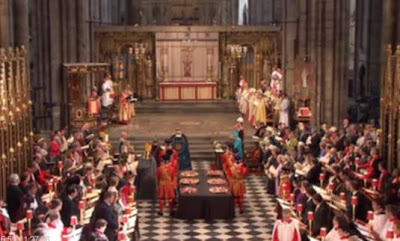 Further to my post for Mandy Thursday afternoon I was pleased to find that BBC i-Player has a recording available of the Royal Maundy Service that took place at Westminster Abbey last Thursday. Never having seen the service I watched the recording and found it fascinating.

In the photograph above one can see six alms dishes, the oldest being from the reign of King Charles II, laid on a table in medio chori guarded by Yeomen. The dishes contain the purses containing the Royal Maundy Money. This year eighty-five men and eighty-five women received these purses. By coincidence last Thursday happened to be Her Majesty The Queen's eighty-fifth birthday - God grant Her many years!

After the reading of the Gospel account of Washing of the Feet the first distribution took place with The Queen passing down the Decani side of the nave where recipients were given the purses. The Queen was accompanied by the Lord High Almoner and several other ministers. These wore towels girded around their waist and torso over their vestments/robes. The Lord High Almoner did not wear an apron as I had been informed - perhaps the office holder did at one time? 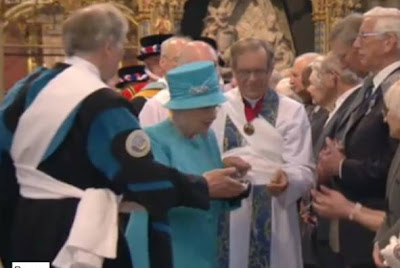 After distributing the purses to the row of recipients on the Decani side of the nave The Queen and ministers processed through the South aisle to the South transept where the distribution continued. After a further reading the second distribution, of the remaining eighty-five purses, took place with The Queen giving the purses to recipients on the Cantoris side of the nave, processing back up the North aisle to complete the distribution in the North transept. There then followed a series of prayers culminating with the Dean's prayer before the high altar, versus Deum, of course.
Posted by Rubricarius at 07:33