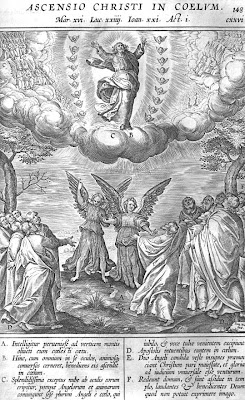 Sunday within the Octave of the Ascension is of semi-double rite. The theme of the great feast of the Ascension continues with most of the texts coming from the feast. However, unlike on the feast,the antiphons are not doubled. The Gospel pericope from St. John contains the beautiful words of the LORD promising the gift of the Paraclete.

At first Vespers yesterday the antiphons for the feast, Viri Galilaei etc, were sung along with the psalms sung on the feast (Pss. 109, 110, 111, 112 & 116). The chapter was of the Sunday, the hymn for the Ascension, Salutis humane Sator, and the antiphon on the Magnificat and collect proper to the Sunday. After the collect of the Sunday commemorations were sung of the preceding Office of St. Francis Carracciolo, St. Boniface and of the Octave. At Compline Te lucis was sung with the Ascension Doxology, the Dominical preces were omitted because of the occuring double feasts and Octave.

At Mattins the invitatory, hymn and antiphons, Elevata est etc., are as on the feast, but the antiphons are not doubled. In the first nocturn the lessons are the Incipit of the First Epistle of St. John, the responsories are of the feast. In the second nocturn the lessons are taken from a sermon on the Ascension by St. Augustine and the same Father provides the third nocturn lessons reflecting on St. John's Gospel. At Lauds all is from the feast except the chapter, antiphon on the Benedictus and collect. After the collect of the Sunday commemorations are sung of St. Boniface and of the Octave.

At the Little Hours the hymns are sung to the melody for the Ascension Doxology (Tone 4) and with the Doxology of the Ascension. At Prime the festal psalms (Pss. 53, 118i, 118ii) are sung rather than the Dominical ones (117, 118i, 118ii) the short lesson is Si quis loquitur. The Dominical preces are omitted due to the occurring double feast and being within the Octave.

Mass is sung after Terce. The Gloria is sung, the second collect is of St. Boniface, the third collect of the Octave. The Creed is sung and the preface and communicantes are of the Octave.

At Vespers again the antiphons and psalms are as on the feast. The chapter, antiphon on the Magnificat and collect are of the Sunday. After the collect of the Sunday commemorations are sung of the following Office of St. Norbert, St. Boniface and of the Octave.