This coming Saturday is the Vigil of Pentecost. Liturgical details of the ceremonies of that day will appear as a separate post. However, the ancient ceremonies, somewhat akin to those of Holy Saturday, will not be the focus of the innumerable blogs devoted to the 'Mass of Ages', 'TLM' or 'EF' etc as the 'ancient use' Missal of 1962 no longer even has the ceremonies for the Vigil of Pentecost even printed in it as these were abolished with the deform of Holy Week in 1956 and had also been prohibited when the 'Easter Vigil' was celebrated in its second form from 1952 to 1955.

When Fr. Peter Morgan returned from Switzerland to these shores in 1971 he vigorously promoted liturgical orthopraxis and led a diverse group of 'remnant' clergy and their supporters in the establishment of a series of 'Mass centres' across the Southern half of England. The Vigil of Pentecost was celebrated in 1972 at the historic London church of St. Etheldreda, Ely Place in Holborn, thanks to the kindness of the then Rector, Fr. O'Malley. Whether the Pentecost Vigil had been celebrated by anyone during the 1960s is unclear, and probably not discernible now. Certainly in the mid-1950s there were small groups of clergy, with a concentration in the North-West of England, who quietly refused Pius XII's changes. One such priest told a friend twenty-years ago that he and like-minded colleagues thought Pius had 'flipped' and that 'normal service' would be resumed in the near-future. Whether Fr. Morgan's 1972 celebration was the first since 1956 or not it was still significant and was celebrated before the St. Pius V Association even arranged the celebration of the Sacred Triduum which did not take place until 1974, when it was celebrated in Guilford. In subsequent years the ceremonies of the Vigil of Pentecost took place at Highclere in Berkshire. With Fr. Morgan's retirement and the establishment of the SSPX Fr. Morgan's successor, Fr. Edward Black, continued to celebrate the Vigil of Pentecost at Highclere. Fr. Morgan himself celebrated the Vigil of Pentecost at Bridgewater, Somerset, between 1977 and 1980. The image below is from a 1981 SSPX newsletter. 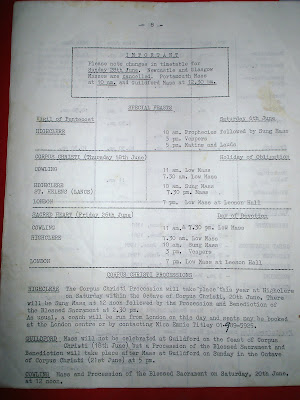 With the 1983 ukase from M. Lefebvre against the Old Rite the celebration of the Vigil of Pentecost was interrupted for several years, although again it may have been celebrated by some 'independant' clergy. In 1990 the current SSPX District Superior, Fr. Paul Morgan, celebrated the Vigil of Pentecost at 4:30am (as part of an All Night Vigil at the church of SS Joseph and Padarn, Holloway) and again carried out the ceremonies of the Vigil of Pentecost the following year. Then, again, an hiatus until the late, and much missed, Arthur Crumly, former principle Master of Ceremonies for the Latin Mass Society, arranged for a sung Vigil of Pentecost at Corpus Christi, Covent Garden in 1993. Arthur had planned to have a solemn celebration - and had planetis plicatis made for the event - but circumstances conspired against that and it was celebrated as a Sung Mass. Nonetheless it was a very moving event. I fear I have never been really functional in the early hours of the morning (indeed I would call 4:30am night) and so was able to absorb far more of the service on this occasion. What was fascinating was the effect the service had on the celebrant, a very pleasant and pastoral man who had at one time been a member of the Canons Regular. After the Mass the celebrant was shaking and tears were flowing down his cheeks. On enquiring what was wrong he related that celebrating the Vigil had reminded him of what Holy Saturday, and the rest of Holy Week, had been and how "What we have now is not the real Old Rite." One sees why the Vigil of Pentecost had to be suppressed: there were no arguments of it putatively being at the wrong time etc and unless it was completely overhauled it would have been a reminder of past glories.

This year, as for the past couple of years, there will be several celebrations of the Vigil of Pentecost in London (and no doubt elsewhere). Arthur Crumly's instigation of the Pentecost Vigil was followed by almost a year of Old Rite celebrations. However, at the prospect of the celebration of traditional Holy Week two, truly despicable, members of the clergy were determined that such an event should not take place - both of course supposedly supporters of authentic liturgical praxis - and instigated a petition to stop the Triduum happening. Two years ago the celebrant of a sung Vigil of Pentecost asked me not to publish photographs "in case the '1962 police' get on my back." For that reason the venues of the Vigils will not be published here.

Safe from the internecine life of modern Rome there will of course be a webcast on Saturday of a Pontifical Vigil of Pentecost from the church of St. Gertrude the Great at 8:00am EDT (Noon GMT; 13:00 BST). I am also delighted that a solemn Vigil of Pentecost will be celebrated at the Anglo-Catholic church of St. Magnus the Martyr, Lower Thames Street. The blogger Ex Fide gives details and a synopsis of the Vigil service. St. Magnus the Martyr and the Ordo are actually quite closely linked. A young Peter Morgan used to frequently attend liturgies at St. Magnus and both knew and was influenced by its famous, aristocratic, incumbent for the best years of the twentieth century Fr. Henry Joy Fynes-Clinton. Fr. Morgan told this blogger that he had been impressed with Fr. Fynes-Clinton's careful and loving celebration of the Roman liturgy and had wanted to re-create that ethos when he instigated the production of the Ordo in 1973.
Update: Another friend, both of this blogger and the Saint Lawrence Press, Canon Jerome Lloyd of the Old Roman Catholic Church will be celebrating the Vigil of Pentecost in Brighton at 11:30am on Saturday. For directions please click here.
Posted by Rubricarius at 16:00

Email ThisBlogThis!Share to TwitterShare to FacebookShare to Pinterest
Labels: Musings, Vigil of Pentecost

I am pleased to report that, as it has been since, I believe, 2002, the Vigil of Pentecost will be celebrated at S. Clement's (Anglo-Catholic) parish in Philadelphia at 10 a.m. (EDT) This will be followed by Vespers, Compline, Matins, and Lauds at approximately 1:30 p.m.

Because we are without a curate at present the ceremonies will be those of the Sung Mass this year.

Please do send some photographs.

Ah! I thought you'd have posted something. Just wrote this, it's not much but hey, it's something.

Just came from our Vigil of Pentecost according to the 1955 books! We sang the Minor Hours before the Vigil, and after the Mass, we sang Vespers. No photographs though.

Delighted to hear your news. Excellent to know the Hours were sung too.

A blessed Pentecost and Octave to you!

Our chapel in Louisville,Kentucky celebrate Holy Week,including Holy Saturday,according to the pre-1950 Rite.(Saturday 7:30 AM Mass)
Our priest also celebrates the Holy Sacrifice of the Mass according to the 1945 Missal.
Our chapel is the only one I've seen light a 3rd candle to the right of the Altar after the Sanctus and extinguish it after Holy Communion is over.
Our priest belongs to a small order in the American Midwest.
They are Thuc line clergy and their Bishop received Episcopal Consecration from Bishop McKenna in 1999.