Mass is sung after Terce. The texts are proper to the day. The Gloria is sung, the Sequence is sung and the Creed. The preface, communicantes and Hanc igitur are those of Pentecost. At Vespers all is as on the feast except the antiphon on the Magnificat and collect. There are no commemorations.

Usually at this time of the liturgical year the supporters of the 'liturgical books of 1962' come up with anecdotes about Paul VI supposedly being surprised that the Pentecost Octave was not to be found in the 1970MR and crying at the sight of green vestments on the Monday after Pentecost.

This is curious for a number of reasons. Firstly, as octaves go, the Pentecost Octave is not as old as many of the other Octaves, being universally celebrated from the eleventh century (c.f. Epiphany, SS Peter & Paul, Dormition etc). Of course, the reason for the protestation by certain of these people is that it is still in MR1962 but not in MR1970: in the world of revisionism and fantasy they inhabit anything pre-1962 or post-1962 is of no value, perfection having been only achieved between 8th December 1962 and the Saturday before Advent Sunday 1964. Secondly, the discussion over abolishing the Octave of Pentecost had been going on for some years. It was a question for discussion in the 1948 Memoria. Clearly Pentecost was the fiftieth day that anciently had ended the Paschal season a point of view was that to give the fiftieth day an Octave actually distracted from it. 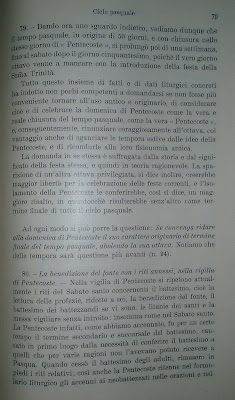 The result of the consultation of Dom Capelle, Fr. Jungmann and Mgr. Righetti (published 1950) is interesting: 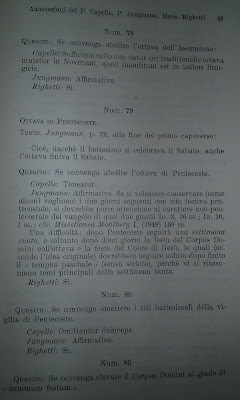 One sees disagreement over ideas with the Benedictine's view that the Octave be retained but with the others agreeing it should be abolished. The 1948 Commission took the decision to abolish the Octave of Pentecost at its seventh meeting on February 14th, 1950. (Vide: Bugnini, 'Reform..', p.320 & Giampietro, 'Antonelli..', p. 289) although this was not to happen in practice for two decades being dependent on working out the lectionary etc for 'Ordinary Time'.

Paul VI would have been well aware of these discussions. Furthermore MR1970 contains a specific rubric after Pentecost Sunday: 'Ubi feria II vel etiam III post Pentecosten sunt dies quibus fidelis debent vel solent Missam frequentare, resumi potest Missa dominicae Pentecostes, vel dici potest Missa de Spiritu Sancto, pp. 838-843' This of course reflects Jungmann's suggestion and Bugnini's comments. As Pentecost Monday was kept with some solemnity in Italy it therefore seems incredulous that Paul VI would have been unaware of the history of the discussion regarding the abolition of the Octave and by the rubrics of the missal he promulgated would not have to have used green vestments anyway.
Posted by Rubricarius at 09:01

Email ThisBlogThis!Share to TwitterShare to FacebookShare to Pinterest
Labels: Pentecost, Within the Octave

Another problem with the anecdote is the date.

Pentecost 1970 fell on 17 May. The following day in the Novus Ordo calendar = St. John I, PM. Admittedly, St. John is optional in the General Roman Calendar. I don't know the status of the proper calendar for the Diocese of Rome at that time...the new calendar was not promulgated for Rome until 1973 (St. John an option + St. Felix of Cantalice as an option on the same day). If the anecdote were true, someone decided to use the feria and not the martyr pope. Possible, but circumstantially not supportive of the anecdote's veracity either - rather the contrary.