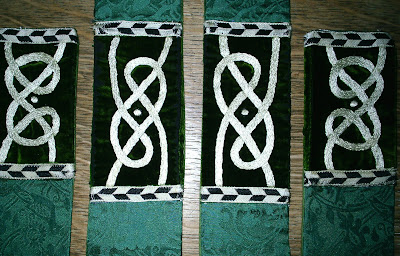 Today is the anticipated twenty-third Sunday after Pentecost. The Sunday is of semi-double rite and the liturgical colour is green.

Vespers yesterday were second Vespers of the Dedication of the Basilica of SS Peter and Paul. Although only of greater double rite being a feast of the LORD the feast took precedence in concurrence with the anticipated Sunday. The Sunday was commemorated with the antiphon on the Magnificat, Deposuit Dominus etc, from the ferial Psalter for Friday, the versicle and respond Diragatur Domine etc & Sicut incensum etc and the collect proper to the Sunday, Absolve quaesumus. After the commemoration of the Sunday commemorations were sung of St. Elizabeth and St. Pontianus. The Suffrage was omitted due to the concurrent double feasts as were the Dominical preces at Compline. At Compline the Dominical psalms were sung.

Before Mattins there is a colour change from white to green. The antiphons and psalms are from the Psalter for Saturday. In the first nocturn the first lesson is the Incipit of the Prophet Abdias (transferred from yesterday). The second and third lessons are the Incipit of the Prophet Jonas proper to the Saturday. The responsories are those of the Sundays in November so the first responsory is Vidi Dominum sedentem, the second Aspice Domine de sede and the third Aspice Domine, quia facta est. In the second nocturn the lessons are from a tract of St. Augustine on the psalms (for the XXIII Sunday which were introduced into the Roman rite in the new 1914 Breviary. Prior to this time only the lessons of the homily for this Sunday were read in the ferial nocturn of Saturday, or another ferial day if Saturday was occupied by a feast of nine lessons). The responsories are Super muros tuos, Muro tuo, and Sustinuimus pacem. In the third nocturn the homily on St. Matthew's Gospel is from St. Jerome. The seventh responsory is that used on Saturdays, i.e. the seventh of the preceding Sunday, Laudabilis populus and the eighth Duo Seraphim. The Te Deum is sung.

At Lauds the antiphons and psalms from the Psalter are sung. The antiphon on the Benedictus and collect are proper to the Sunday. After the collect of the Sunday commemorations are sung of St. Elizabeth and St. Pontianus. At Prime the chapter is Regi saeculorum. The Dominical preces are omitted due to the occurring double feast.

At the other Hours the antiphons and psalms are of the Saturday, the collect is of the Sunday. Mass is sung after Terce as normal for Sundays. At Mass the Gloria is sung, the second collect is of St. Elizabeth, and the third collect of St. Pontianus. The Creed is sung and the preface is of the Blessed Trinity.

At Vespers the antiphons and psalms of Saturday are sung. The antiphon on the Magnificat is Super muros tuos for the fifth Saturday of November. After the collect of the twenty-fourth Sunday commemorations are sung of St. Felix of Valois and St. Elizabeth. The Suffrage is omitted due to the occurring double feasts as are the Dominical preces at Compline.

Prior to the reform of 1911-13 an anticipated Sunday was far simpler and less privileged. Only one nocturn, the ferial nocturn of the Saturday (or other free day), was sung with three lessons, the homily of the twenty-third Sunday. In this case the responsories were Laudabilis populus, Angustiae mihi and Misit Dominus Angelum. The Te Deum was not sung. At Mass there was neither Gloria nor Creed and the dismissal was Benedicamus Domino - so very similar to a resumed Sunday.

In the 'liturgical books of 1962' the Dedication of the Basilica of SS Peter and Paul is reduced to a III class feast with the ferial psalter. The Sunday is not anticipated but omitted entirely. Saturday is again a III class feast of St. Elizabeth with a single nocturn at Mattins. Mass is of the feast with a commemoration of St. Pontianus at said Masses. At Vespers there are no commemorations.

Image: Detail of a stole belonging to a green set of vestments designed by Dr. Adrian Fortescue
Posted by Rubricarius at 08:01

How do you interpret the odd detail in the Office that the lessons are taken from the Saturday, according to the rubrics, but the responsories from the Sunday?

It is an interesting rubric. I read it that the lessons are for Saturday but the responsories in the first nocturn are Vidi Dominum..., Aspice, Domine, de sede... and Aspice, Domine, quia facta.. as for the other Sundays of November.

The second nocturn lessons were created as part of the 1911-13 reform and their responsories too are the same as the other Sundays of November.

I suspect the issue may be those years/places when/where the anticipated Sunday has extra incipits that must be read on the Saturday, which could cause responsory questions.

(Of course Franciscans had S. Elisabeth on Saturday and no anticipated Sunday!)

I am sure that is indeed the reason for the responsories.

It is interesting, to me at least, that the anticipated Sunday gained two nocturns with the changes.