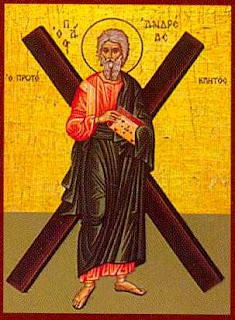 The feast of Saint Andrew the Apostle, the 'First Called', is a Double feast of the Second Class. It was preceded yesterday by a Vigil, which because of Advent, as was explained in yesterday's post, not part of the Office but the celebration of Mass. According to St. John's Gospel St. Andrew was a disciple of St. John the Baptist, whose testimony first led him and St. John the Evangelist to follow Jesus. St. Andrew at once recognised Christ as the Messiah. St. Andrew preached the Gospel in Asia Minor and, according to Eusebius, as far as Kiev. St. Andrew is the patron saint of such diverse countries as Scotland and Russia. According to tradition he was crucified at Patras in Achaea. Devotion to St. Andrew was strong in the medieval period and many Western Kalendars such as the venerable Sarum Rite had an octave for the feast. In the Roman liturgy clearly St. Andrew was once regarded as more important than in modern times hence his inclusion in the Libera nos.

The liturgy of the day is festal and began with first Vespers of the feast yesterday afternoon. The antiphons Salve, crux pretiosa etc were sung with the psalms for the Common of Apostles. After the collect of the feast a commemoration was sung of the Advent feria with the antiphon on the Magnificat being proper to the Tuesday, Quaerite Domininum etc, and the collect from the first Sunday. At Compline the Sunday psalms were sung and the preces were omitted.

At Mattins the antiphons are proper to the feast, Vidit Dominus etc., which are sung with the psalms from the Common of Apostles. In the first nocturn the lessons are from St. Paul's Epistle to the Romans. In the second nocturn the lessons are hagiographical and in the third nocturn the homily on St. Matthew's Gospel is from the writings of St. Gregory. At Lauds the antiphons sung at Vespers, Salve, crux pretiosa etc., are sung with the Dominical psalms. After the collect of the feast a commemoration is sung of the Advent feria. The antiphon on the Benedictus is proper to the Wednesday of the first week, De Sion etc, with the collect of the first Sunday.

At the Horae Minores the antiphons Salve, crux pretiosa etc are sung with festal psalmody. At Prime (Pss. 53, 118i & 118ii) the lectio brevis is Isaias enim dicit.

Mass is sung after Terce. The Gloria is sung, the second collect is of the Advent feria (the collect Excitafrom Advent Sunday). The Creed is sung and the preface is of the Apostles.

According to the 'liturgical books of 1962' yesterday's Vigil is abolished as are first Vespers for St. Andrew's feast. Compline on Tuesday had the ferial psalms. At Prime and the other Horae Minores ferial antiphons and psalms are sung and the lectio brevis at Prime is of the season.
Posted by Rubricarius at 08:01