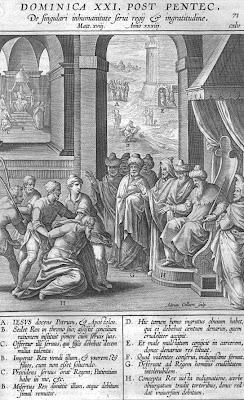 The twenty-first Sunday after Pentecost is of semi-double rite. This year it is the third Sunday of November and Sunday within the Octave of All Saints. The liturgical colour is green, before the extensive changes of 1911-13 the colour of the Octave, white, was used for the Sunday. The Gospel pericopes from St. Matthew contain the parable of the unjust and ungrateful servant who, forgiven his debts by the King, demands what is owed to him from others and shews complete ingratitude. In years when Novmber 5th falls on Sunday then that Sunday is the second Sunday of November and its lessons and those of the following week are read in due course. In other years, when November will only have four weeks, the second Sunday and its week are omitted.

At Vespers yesterday afternoon the psalms of Saturday were sung. The antiphon on the Magnificat was Muro tuo for the Saturday before the third Sunday of November. After the collect of the Sunday a commemoration of the Octave of All Saints was sung. The Suffrages of the Saints was omitted because of the Octave as were the Dominical preces at Compline.

At Mattins in the first nocturn the lessons are the Incipit of the Book of the Prophet Daniel. In the second nocturn the lessons are from book of St. Athanasius to Virgins. In the third nocturn the homily is from St. Jerome on the eighteenth chapter of St. Matthew's Gospel. The Te Deum is sung. At Lauds, after the collect of the Sunday, a commemoration is sung of the Octave. The Suffrage of the Saints is omitted.

At Prime (Pss. 117, 118i & 118ii) both Quicumque and the Dominical preces are omitted because of the occurring Octave.

Mass is sung after Terce. The Gloria is sung, the second collect is of the Octave. There is no third collect today. The Creed is sung as is the preface of the Blessed Trinity.

In some places the External Solemnity of All Saints is kept. The Mass Gaudeamus etc is sung in white vestments. The Gloria is sung, the second collect is of the Sunday, the Creed is sung, the preface is of the Blessed Trinity and the last Gospel of the Sunday.

Vespers are of the Sunday. After the collect of the Sunday a ocmmemoration of the following seventh day within the Octave is sung. The antiphon used for this commemoration is Angeli, Archangeli, Throni etc from first Vespers of the feast.

In the 'liturgical books of 1962' there are no commemorations or Suffrage at Vespers and the Octave has been abolished. Both the first and second Sundays of November, and their weeks, are omitted (the second Sunday and its week never make an appearance in this 'ancient use'). Mattins is cut down to one nocturn of three lessons. At Lauds there is neither a commemoration nor Suffrage. At Mass there is one collect. Vespers are of the Sunday without any commemoration.