God save The Queen! 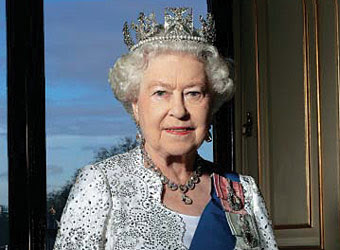 May there be many singings of the Te Deum today in thanksgiving for The Queen and through all of the Diamond Jubilee celebrations.

God save The Queen, long may she reign!

Official Jubilee photograph from Hello.
Posted by Rubricarius at 16:00

There seem to be various versions of the traditional versicle and oration for the Queen traditionally sung after High Mass on Sundays; some say "ancilla" (as does my old St Andrews Missal), others, "famula"; some include the Duke her husband before the royal progeny (adding "principe consorte et" - on the model of the phrase inserted for the queen consort of a king); some spell her name with a zed, others with an ess (as is more usual in Latin)...

What is the official version?

A very good question Joshua and one that I do not have the answer to.

I have several copies of the Ritus Servandus but none of them in London. I do not recall seeing a version with the petition for HRH the Duke - but very much like it! A friend once showed me his copy of a nineteenth century layman's missal - the type that are not supposed to exist - and that had the prayer for King George, Queen Charlotte and the Royal Issue.

I will undertake some research.