A significant variation in the printed texts of 1962MR is, of course, seen in Holy Week.  This major revision took place following Maxima Redemptionis with the publication of the 1956 Ordo Hebdomadae Sanctae Instauratus (OHSI).  These texts remained virtually unchanged in 1962MR, a notable exception being the removal of the word 'perfidious' from the prayer for the Jews on Good Friday.

Notwithstanding the significant textual (and ceremonial) variations in the new Pacellian Holy Week the changes to the typography of the Missal are also worthy of consideration.  The layout in OHSI is stylistically very different to traditional editions of the service books of the Roman rite. Take, for example, Palm Sunday. Thanks to Google Books it is easy to look at numerous editions of the traditional Missal, the image below is from a nineteenth century printing. 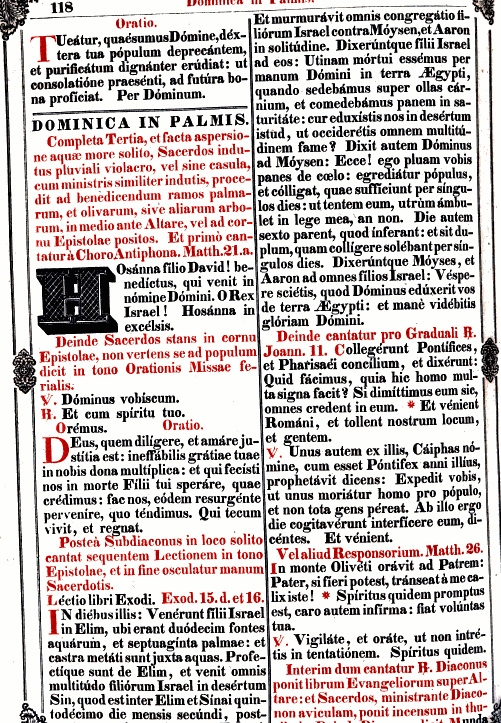 This layout, familiar in all editions of the MR up until the mid-1950s, disappeared with the New Holy Week order, the style of which in the books was very different. The photograph below is from a copy of the 1956 Vatican editio typica of the OHSI. 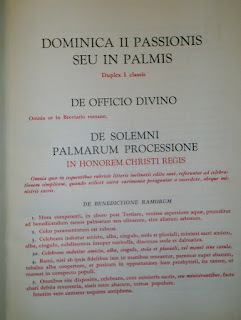 The essential characteristic was a type of 'liturgy by numbers' with a sequential numbering of rubrics within the texts for given liturgical days. In 1962MR this is confined to Holy Week but would be extended in the later stages of the reform to other days and to the Ordo Missae and Anaphora. Palm Sunday in the 1970MR is shown at the bottom of this post.

Turning from OHSI to the 1962MR the essential similarity of the text and the style from six years earlier can be seen: 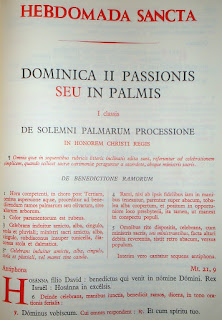 The 'liturgy by numbers' style, confined in 1962MR to Holy Week, extended to other areas of Missal with the subsequent stages of the reform with 1970MR having a numbered Ordo Missae.  Palm Sunday in the 1970MR is seen below. 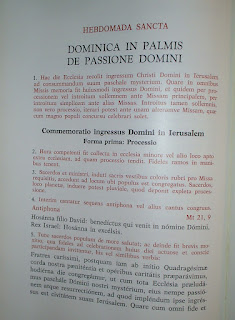 Thank you for this series of posts All in order with what was planned at the highest level from c1948. The " traditional Roman rite" . But the Breviary had been half destroyed years before.

Thank you. Indeed more change had been promised in Abhinc duos annos. Perhaps some posts on the reform of the Breviary will be in order after this series.

Thank you. I once glanced through Abhinc duos annos of 1913 and shall do so again. There was sense of changing many things for no very good reason as in 1911, I feel. I should add that I find your Tridentine Rite posts most helpful as the Julian/Gregorian difference makes me think about the reasons for the rubrics and better able to apply them when not dealing with "worked examples". So - most important -"my" prayer is calm and not fussed by the rules that are there to help after all. That approach to teaching might have helped me to pass Maths O Level! G

I would love to read a history of the Breviary form, of course after this excellent series is complete.

This is a most interesting and worthy Series.

A similar one on the Breviary is eagerly awaited.