Octave Day of the Epiphany 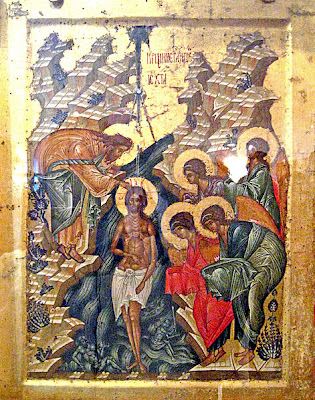 At Vespers yesterday afternoon all was sung as first Vespers of the Epiphany except the collect which is proper to the Octave Day. Commemorations were sung of the feast of The Holy Family and of the Sunday.

At Mattins the invitatory, Christus apparuit nobis, Venite adoremus, and hymn, Crudelis Herodis Deum, are sung as on other days within the Octave, the special arrangement being for the feast only. The antiphons Afferte Domino etc are sung, doubled, with the psalms of the feast. In the first nocturn the lessons are from the Epistle to the Corinthians, Si linguis hominum (for the Friday after the first Sunday after the Epiphany). The first responsory is Hodie. In the second nocturn the lessons are from a sermon of St. Gregory the Theologian and in the third nocturn the homily if from St. Augustine. The Te Deum is sung.

At Lauds all is as on the feast, the antiphons Ante luciferum genitus etc are sung with the Dominical psalms. The Office hymn is O sola magnarum urbium. Thecollect is proper to the Octave Day Deus, cujus Unigenitus.

At the Hours the hymns have the Doxology and melody of the Epiphany. The antiphons and psalm are sung as on the feast but with the proper collect of the Octave Day.

Mass is sung after Terce. The Mass formulary is the same as on the feast except the orations and Gospel are proper. The Gloria is sung, the Creed is sung and the preface and communicantes are of the Epiphany.

Vespers are of the Octave Day with commemorations of tomorrow's feast of St. Hilary of Poitiers and St. Felix.

In the 'liturgical books of 1962' the Octave, and of course the Octave Day, have been abolished. The former Octave Day was 'resprayed' as the feast of the Baptism of the LORD in the 1955 stage of the reform and celebrated as a greater-double. In the 1960/61 revisions the feast became II Class. However, when it falls on a Sunday it is omitted and the feast of the Holy Family is celebrated in its place. At the Hours the Dominical antiphons are sung. At Prime psalm 53 is not sung but Ps. 117. The hymns do not have the Doxology in honour of the Holy Family, or that of the Epiphany. At Mass there is a single collect and no commemoration of the Baptism of the LORD or the Sunday. In the Ordinary Form, the superior version of the two forms of the modern Roman rite, today is kept as the Baptism of the LORD, i.e. the old Octave Day.

On Saturday, I prayed II Vespers of the Holy Family w/ Comm. of the Octave Day et al. based on multiple sources indicating that the Holy Family is a Double 2cl. feast. However, in both my Breviarium (1952) and in the Liber Usualis (1954), it is listed as a Double Major which, according to the table of concurrence, the former would yield to the Octave Day of the same rank per your note.

Was the rank subsequently raised in the 1955 revisions, and even those places which observe pre-1955 rubrics still celebrate the Holy Family as a Double 2cl? Or is the rank higher as a particularity in the US?

The feast of the Holy Family became a II Class feast in the 1960 (effective 1961) revision. I have never heard that it had a higher rank than greater-double in the USA, except where it was the titular feast.