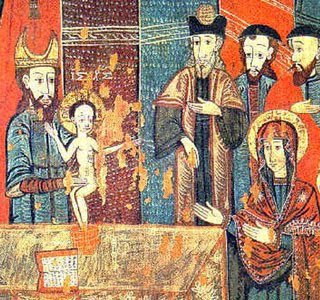 Anciently, two if not three Masses were celebrated this day in Rome. There was the Octave Day of the Nativity, a Mass in St. Mary Major in honour of Mary, Mother of God (c.f. today's orations in the Missal and the 1970MR), and the Circumcision. Although the latter probably fused with the Octave Day at an early age. The eleventh century Missal of Robert of Jumieges (now re-published by the Henry Bradshaw Society) gives two sets of texts: the first for the Octave Day all specifically referencing both the Circumcision and the Octave Day and, then, for the first Sunday after the Nativity are the set of orations as found in Pius V's Missal for today but with a proper preface.

At first Vespers yesterday afternoon the proper antiphons O admirabile commercium etc were sung with the psalms for feasts of the BVM (Pss.109, 112, 121, 126 & 147). The Office hymn was Jesu, Redemptor omnium (as on the feast of the Nativity). The Doxology which has been sung since first Vespers of the Nativity Jesu, tibi sit gloria etc continues to be sung until the Epiphany. After the collect of the feast there were no commemorations.

At Mattins the invitatory is Christus natus es nobis, Venite adoremus and the Office hymn Jesu, Redemptor omnium. In the first nocturn the antiphons Dominus dixit ad me etc, are sung with psalms 2, 18 & 23. The continue to be read from the Epistle to the Romans. Prior to the 1911-13 reform today chapter 3 and 4 of that letter formed the first nocturn lessons with the first verse 'What advantage then hath the Jew, or what is the profit of circumcision? and all of St. Paul's discourse on circumcision and the Gentiles. After that reform the readings from Romans started a day earlier, on the feast of St. Thomas Becket, with the result that the first part of chapter three is omitted and no longer formed the 'appropriated' first lesson for today. In the second nocturn the antiphons Speciosus forma etc are sung6 & 95. The lessons are from St. Leo's seventh sermon on the Nativity of the LORD. In the third nocturn the antiphons In principio etc are sung with psalms 96, 97 & 98 and the homily is from the writings of St. Ambrose on St. Luke's Gospel. The Te Deum is sung. At Lauds the same antiphons as at Vespers, O admirabile commercium etc, are sung with the Dominical psalms. The Office hymn is as on the feast of the Nativity, A solis ortus cardine.

At Second Vespers the antiphons O admirabile commercium are again sung with the same psalms as at first Vespers (Pss. Pss.109, 112, 121, 126 & 147). The versicle and its respond and the antiphon on the Magnificat are proper to Second Vespers of the feast. No commemoration is made of the following Feast of the Holy Name.

In 'the liturgical books of 1962' there are only a few, textual, differences in the liturgy today. The name Circumcision has been excised and the day is renamed simpley Octave Day of the Nativity and raised to first class rank. At the Little Hours the antiphons are doubled and the tone of the hymns is that used on solemn feasts, the Doxology is ordinary.
Posted by Rubricarius at 08:01