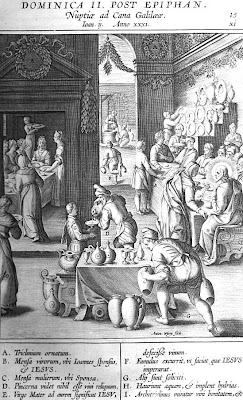 The second Sunday after the Epiphany is of semi-double rite and its liturgical colour is green. The Gospel pericopes at Mattins and Mass are from St. John's account of the Marriage Feast at Cana.

At Vespers yesterday afternoon the antiphons and psalms of Saturday were sung. The Office hymn was Jam sol recedit igneus. The antiphon on the Magnificat was Suscepit Deus which will be used on all Saturdays when Vespers are of the Sunday until Septuagesima. After the collect of the Sunday commemorations were sung of the preceding Office of St. Peter's Chair at Rome, of St. Paul the Apostle, of SS Marius and Others and of St. Canute. The Suffrage was omitted as were the Dominical preces at Compline.

At Mattins the invitatory is Adoremus Dominum and this will be sung until Septuagesima. The Office hymn is Primo die and this is sung at Sunday Mattins until the first Sunday in Lent. In the first nocturn the lessons are the Incipit of the Second Epistle to the Corinthians. In the second nocturn a sermon of St. Chrysostom provides the lessons and, in the third nocturn, the homily is from St. Augustine. At Lauds the Office hymn is Aeterne and that too is sung at Sunday Lauds until the first Sunday of Lent. After the collect of the Sunday commemorations are sung of SS Marius & Others and of St. Canute followed by the Suffrage of the Saints. At Prime both Quicumque and the Dominical preces. are sung.

At Mass the Gloria is sung, the second collect is of SS Marius & Others, the third collect is of St. Canute. The Creed is sung and the preface is of the Blessed Trinity.

At Vespers the antiphons and psalms of Sunday are sung. The Office hymn is Lucis creator. After the collect of the Sunday a commemoration is sung of the following feast of SS Fabian & Sebastian. The Suffrage is omitted as are the Dominical preces at Compline due to the concurring double feast.