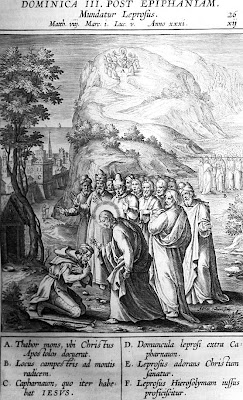 At Vespers yesterday afternoon the antiphons and psalms appointed for Saturday were sung. The Office hymn was Jam sol recedit igneus. The antiphon on the Magnificat was Suscepit Deus. After the collect of the Sunday commemorations were sung of the preceding Office of the Conversion of St. Paul the Apostle, of St. Peter the Aposlte and of St. Polycarp. The Suffrage of the Saints was omitted due to the double feasts and, likewise, at Compline the Dominical preceswere not sung.

At Mattins the invitatory is Adoremus Dominum and the hymn Primo die . Mattins has the usual three nocturns. In the first nocturn the lessons are the Incipit of St. Paul's Epistle to the Galatians. In the second nocturn the lessons are from an exposition of this Epistle to the Galatians by St. Augustine and in the third nocturn the homily is from St. Jerome. The Te Deum is sung. At Lauds the Office hymn is Aterne rerum conditor. After the collect of the Sunday a commemoration is sung of St. Polycarp. The Suffrage of the Saints is omitted due to the commemorated double feast and for the same reason at Prime both Quicumque and the Dominical preces are omitted.

At Mass the Gloria is sung, the second collect is of St. Polycarp. Today there is no third collect. The Credo is sung and the preface is that of the Blessed Trinity.

At Vespers the Office hymn is Lucis creator. After the collect of the Sunday commemorations are sung of the following feast of St. John Chrysostom and of St. Polycarp. The Suffrage of the Saints is omitted due to the double feasts as are the Dominical preces at Compline.

Off the subject but this is important.
Recently read there are only 29
pre-1968 Roman Rite Bishops still living.
If you reads this comment,please pray that 1 or more of these 29 Bishops ordain and consecrate using the traditional rite of Holy Orders.
These Bishops are the last link of the pre-1968 apostolic succession besides the Thuc,Mendez,and Lefebvre lines of clerics.
God bless + thank you for your time.
Andrew