Sunday within the Octave of the Epiphany - The Holy Family 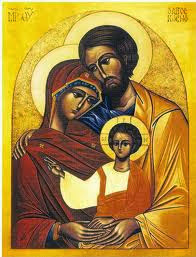 The feast of the Holy Family is of greater-double rite and its liturgical colour is white. The feast was granted by Leo XIII in 1893 in response to numerous petitions from Ordinaries and originally placed on the third Sunday after the Epiphany. Following the reforms of 1911-13 - which aimed to remove the celebration of feasts assigned to Sundays - Benedict XV assigned it to the Sunday within the Octave of the Epiphany and extended the feast to the Universal Kalendar. Although of only greater-double rite it is classed as a feast of the LORD and so takes precedence over the semi-double Sunday within the Octave of the Epiphany.

At Vespers yesterday afternoon the antiphons Jacob autem etc were sung, doubled, with psalms 109, 112 & 121, 126 & 147. The Office hymn was O lux beata caelitum. After the collect of the feast commemorations were sung of the Octave of the Epiphany (the antiphon on the Magnificat being proper to the 11th January) and of the Sunday within the Octave. At Compline Te lucis was sung with the Doxology of the feast Jesu, tuis obediens etc.

At Prime and the Hours the antiphons from Lauds are sung in the usual order. The hymns of the Hours have the Doxology proper to the feast. At Prime (Pss. 53, 118i & 118ii) the versicle Qui Mariae et Joseph subditus fuisti is sung in the short responsory and the lectio brevis is Semetipsum exinanivit.

In the afternoon first Vespers of the Octave Day of the Epiphany are sung. The antiphons Ante luciferum genitus etc are sung, doubled, with psalms 109, 110, 111, 112 & 116. The Office hymn is Crudelis Herodes, Deum. After the collect of the feast, which if proper to the Octave Day, commemorations are sung of the Holy Family and of the Sunday within the Octave. At Compline Te lucis has the Doxology of the feast.

In the 'liturgical books of 1962' the feast of the Holy Family has been raised to II Class (in order for it to precedence over the Sunday). The Octave of the Epiphany has been abolished. At Vespers there were no commemorations. At Compline and the Hours the hymns have the ordinary Doxology. At Lauds there are no commemorations. At Prime and the Hours the antiphons and psalmody are of the Sunday, at Prime the lectio brevis is of 'Epiphanytide'. At Mass there is a single collect. Vespers are of the feast without any commemorations.
Posted by Rubricarius at 08:01

According to my missal (published in 1944) if we take the mass of the Holy Family today, the mass for the Sunday in the octave of Epiphany must be celebrated on the following Monday; but that's already the feast of the octave. Can you shed any light on that please?