The Shrine of St. Edward the Confessor

After Evensong, which had a very large crowd of people in attendance for a week-day, those who wished were allowed to ascend the Sacrarium (sanctuary) steps and enter the Shrine. The floor of the Sacrarium is formed by the famous Cosmati or Great Pavement. This was the central jewel of Henry III's rebuilding of the Abbey and is made up of fragments of marbles and semi-precious stones taken from the ruins of Ancient Rome. However the pavement was not visible as a major restoration is currently underway (and, quite rightly, it is always covered when there is heavy foot traffic). 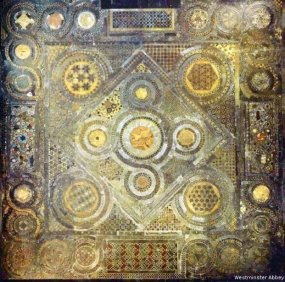 We were ushered towards the South door of the Altar Screen. Whilst waiting for the slowly moving queue to creep forward I ended up standing about three or four feet away from the sedilia, one of the greatest medieval treasures of the Abbey. The four-seat sedilia originally had eight painted panels, four on both the North and South sides. Only two now remain on the North side, in a perilous condition, depicting what are thought to be King Edward I (not to be confused with either St. Edward the Confessor or St. Edward the Martyr) and King Henry III. Most of the other panels were destroyed when the Abbey was desecrated by the Enemy of God Oliver Cromwell in the frenzy of destruction and pollution these Isles suffered after the Regicide when Cromwell and his fellow terrorists had seized power in 1649. 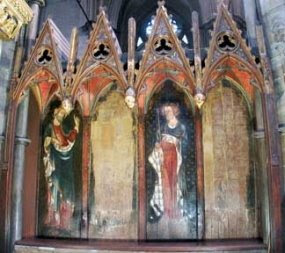 Both of the above photographs are from the excellent interactive Plan of the Abbey on its fascinating website.

I passed through the South door of the Altar Screen, noticing that contrary to what I had been told it was not a Victorian structure but a medieval one. The rear of the screen is not gilded but of plain stone, worn smooth and polished by innumerable hands over the centuries. There are numerous niches that must have contained images or lights at one time. I slowly made my way towards the Shrine. The atmosphere was quite electric and palpable. Six very large standard candlesticks with their candles burning high above our heads surrounded the Shrine, the candlesticks on the early-twentieth century altar that is adjoined to the West end of the Shrine had their candles lit and there were other candles higher on the cornice of the structure. Clouds of incense hung in the air almost appearing luminous in the flickering candle light. The queue of people moved slowly forward in an anticlockwise direction most stopping to kneel and pray in one of the niches at the, medieval, base of the Shrine. My turn came and I found the niches are quite deep, to bring the pilgrim closer to the remains of the Saint, I said a prayer and venerated the Shrine with my lips. I re-entered the Sacrarium through the North door and felt that I was floating and was also aware of a deep sense of the Divine.

I would encourage any readers who are in London this week to visit the Shrine (and of course the Abbey itself). Details of times may be found on the Abbey's website (here)
Posted by Rubricarius at 22:34