XXIII Sunday after Pentecost and 4th of October - Missionary Sunday 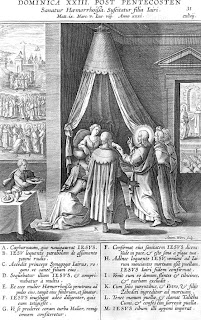 Today is the XXIII Sunday after Pentecost and the IV Sunday of October, it is of semi-double rite. It is also Missionary Sunday.

The feast of St. Luke the Evangelist takes precedence in concurrence and so second Vespers of St. Luke were celebrated on Saturday afternoon, in red, with a commemoration of the Sunday (the antiphon upon the Magnificat being Exaudiat Dominus etc) and of St. Peter of Alcantara. Festal Compline is sung with the solemn tone for Te lucis and there are no preces.

The Sunday Office begins at Mattins. As usual there are three nocturns and nine lessons. in the first nocturn the lessons are the beginning of the Second Book of Machabees. The second nocturn, Patristic lessons, are from Treatise of St. John Chrysostom on the forty-third psalm. The gospel is from Matthew and third nocturn lessons a Homily of St. Jerome on the raising of the rulers daughter by the Lord and of the woman with an issue of blood being made whole by touching His garment. At Lauds a commemoration of St. Peter of Alacanatra is made, the Suffrage is not sung. At Prime there are no preces, because of the occuring double feast.

At Mass the Gloria is sung, the second collect is of St. Peter of Alcantara and the third collect is from the Votive Mass for Propogation of the Faith, Deus, qui omnes homines, the Creed is sung and the preface is of the Blessed Trinity. The last prayer is an example of an oratio imperata pro re gravi.

At Vespers a commemoration is made of Monday's Office of St. John Cantius and also of St. Peter of Alcantara. There is no suffrage and there are no preces at Compline.

In the City of Westminster the Octave of St. Edward is commemorated at Lauds, Mass and Vespers.

In the 'liturgical books of 1962' Vespers on Saturday is almost the same but the commemoration of St. Peter of Alcantara is omitted. Compline is the same. This year the 1962 books cut out completely the third Sunday and third week of October and jump to the fourth Sunday. At Mattins there is only one nocuturn of three lessons, all of the second nocturn texts being lost. There is no commemoration of St. Peter of Alcantara at either Lauds or Mass. At Mass the collect for Mission Sunday is added, under the same conclusion, to the collect of the Mass. At Vespers there is no commemoration of the following Office.
Posted by Rubricarius at 07:01

I know this site is about traditional rubrics, but do you know the rationale for the 1962 books skipping the third week?

I believe so that the Second Book of Machabees gets read in part. If this week was not missed out it could not be read the following Sunday because of the feast of Christ the King.