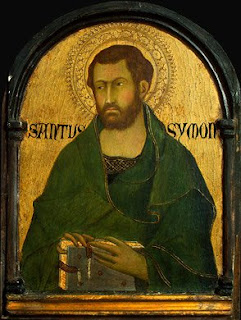 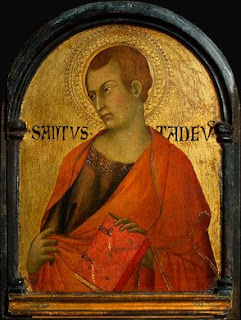 The feast of SS Simon and Jude is a double of the second class. The feast of these apostles is kept on the anniversary of the transfer of their relics to Old St. Peter's in Rome in the seventh century. St. Simon is traditionally believed to have been martyred by a curved sword. St. Jude, also known as Thaddaeus, was martryed by a club. The two probably met, preaching the Gospel in Mesopotamia.

Solemn tones are used for the hymns, orations and preface. The altar has six candlesticks and is vested in red.

At Mattins there are three nocturns. In the first nocturn the readings are from Epistle of St. Jude. The antiphons and responsories are taken from the Common of Apostles. At solemn Lauds, and later at Vespers too, four assistants in red copes assist the Hebdomadarius. At the 'Little' Hours festal psalms are used (the traditional psalms for the Hours, used daily before 1911-13).

At Mass the Gloria and Creed are sung. The preface is that of the Apostles. Second Vespers and festal Compline conclude the feast.

In the 'liturgical books of 1962' the feast has lost first Vespers (rather absurd considering the practice of first Vespers of a feast is more ancient than having second Vespers). At the Hours the ferial antiphons and psalms are used; Prime no longer has the brief lesson of the feast but of the season.

Holy Apostles SS Simon and Jude pray to God for us.
Posted by Rubricarius at 07:36