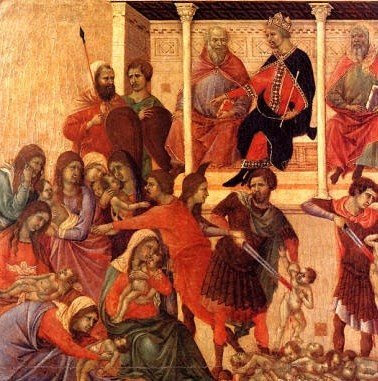 Today is the feast of the Holy Innocents, it is a double of the second class with a simple octave. It is also a 'vacant' Sunday as both the Office and Mass of the Sunday within the Octave of the Nativity are transferred this year to the 30th December.

This year with the feast falling on the vacant Sunday within the Octave of the Nativity the following rules are observed: Mattins has nine lessons but only eight responsories, the Te Deum being sung. At Lauds a comemmoration is made of the Octave of the Nativity. The office is festal, of that of a double of the second class. At the Little Hours the hymns have their Doxology changed in honour of the Incarnation. As usual on doubles of the second class festal psalmody is used at Prime.

At Mass, in red vestments as noted above, the Gloria is sung, the second collect is of the Octave of the Nativity, an Alleluia sung as on other feasts, the Credo is sung and the preface and communicantes are of the Octave of the Nativity. When the feast of the Holy Innocents falls on a feria as well as the liturgical colour being violet the Te Deum is not sung but the ninth responsory sung in its place. Likewise instead of the Alleluia and versicle after the Gradual a Tract is sung.

In the 'liturgical books of 1962' the traditional order of the Nativity Octave is destroyed and today becomes the Sunday within the Octave celebrated in white vestments. Mattins has but one nocturn and the first and second lesson from the Nativity are re-read! The Holy Innocents are reduced to a commemoration at Lauds and non-sung Mass. However no commemoration of the Octave of the Nativity is made in either the Office or Mass. As already referred to the proper Doxology is omitted at the Little Hours and the arrangement is applied to the psalmody of Prime that is used for minor Sundays. Vespers are without any commemorations. In pre-1911 practice the Holy Innocents are celebrated as above but in addition to the commemoration of the Octave of the Nativity the octaves of St. Stephen and St. John are commemorated at Lauds, Mass and Vespers.
Posted by Rubricarius at 08:01