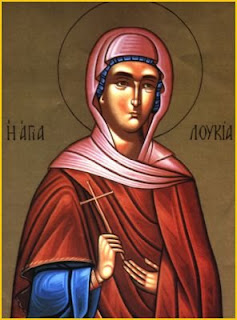 The feast of St. Lucy Virgin and Martyr is of double rite and has a 'proper' Office.

St. Lucy of Syracuse's Latin name, Lucia, shares a root (luc) with the Latin word for light, lux. Jacobus de Voragine stated "In 'Lucy' is said, the way of light" at the beginning of his vita of the Blessed Virgin Lucy, in Legenda Aurea, the most widely-read version of the Lucy legend in the Middle Ages. In the Julian Calendar December 13th was the longest night of the year hence the adoption of this day for St. Lucy's feast. Looking at her entry on Wikipedia I was surprised to learn her feast is actually kept by the Lutherans too.

Her Office began with Vespers yesterday with proper antiphons starting Orante sancta Lucia.. and psalms used for feasts of the BVM. At Vespers a commemoration of the Octave of the BVM and the Advent feria was made.

Mattins has three nocturns and nine lessons but the antiphons and psalms are of the Saturday. The responsories in the second and third nocturns are either proper or taken from the Common. At Lauds the same set of 'proper' antiphons are used as at Vespers and the Sunday psalms are sung. Again at Lauds there is a commemoration of the Octave of the BVM and of the Advent Saturday. At the Little Hours the Saturday antiphons and psalms are sung. Because of the Octave of the BVM all hymns of Iambic metre are sung to the special tone for the BMV and have the Doxology Jesu, tibi sit gloria.

Vespers of the Sunday are sung with a commemoration of St. Lucy and the Octave.

Two interesting points: Firstly, today is a good example of a feast that retained parts proper to it in the reform of 1911-13. Before the reform all double feasts would have used antiphons and psalms from the Common if they lacked (which is the case for the majority) proper antiphons. Secondly, since 1911-13 the versicle in the brief responsory at Prime for Advent Qui venturus es in mundum is considered 'proper'. This means that hymns of Iambic metre on the Sunday follow the normal tone and not that of the Octave.

In the 'liturgical books of 1962' St. Lucy loses first Vespers. Mattins is cut down to one nocturn of three lessons. At Lauds the proper antiphons and Sunday psalms are retained. In Mass the Gloria is sung but there is no commemoration of the Octave, hence no Credo and the Preface is Common (unless the ad libitum Preface of Advent is used found in later edtions of the 1962 missal). At Mass of course the deacon and sub-deacon wear dalmatic and tunicle - a practice in the Roman rite 47 years old this Advent - hardly 'ancient', 'traditional' or 'Gregorian'. St. Lucy is not commemorated at Vespers. Neither, of course, is the Octave.
Posted by Rubricarius at 08:01