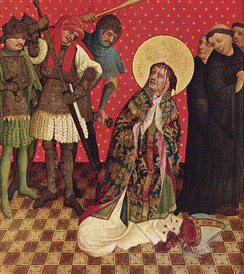 Today is the feast of St. Thomas of Canterbury, it is of double rite. Today, again, the liturgical colour is red.

St. Thomas of Canterbury, or St. Thomas Becket, fell foul of the political machinations of King Henry II and was slain by the King's soldiers in Canterbury Cathedral on December 29th, 1170.

Mattins has, as usual, three nocturns and nine lessons. The antiphons and psalms are taken from the Psalter for Monday. In the first nocturn the beginning of the Epistle of St. Paul to the Romans is read. At Lauds a commemoration of the Octave of the Nativity is made.