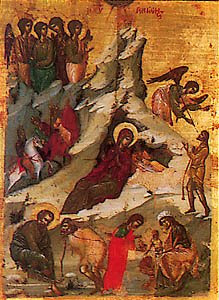 The feast of the Nativity is a double of the first class with a privileged octave of the third order.
Mattins is sung late in the evening, so the Mass which immediately follows can begin at midnight. The Caeremoniale gives special instructions, Lib.II, Cap. XIV, 3, for pontifical mattins, but may be reasonably applied to other celebrations or arranging adequate candles to supply light for the service and talks of candelabris ferreis magnis to help provide this. One can easily see the modern practice of candlelit nine lessons and carols comes from - how unfortunate that the same effort is not made to celebrate mattins.
The invitatorium is proper, when intoning the hymn, Jesu, Redemptor omnium the Hebdomadarius turns and bows to the altar. Mattins has three nocturns and the usual nine lessons. After the Te Deum the collect is sung followed by Benedicamus Domino. The first of the three Masses for the Nativity is then sung. The Gloria is sung (one theory of its origin in the Mass rite is from the song of the Angels on Christmas night to the shepherds) as is the Creed. The preface and communicantes are proper. Lauds, with different antiphons to those used at first vespers immediately follows the Mass.
Later in the morning Prime is sung followed by the second Mass, the Missa in aurora that has a second collect to commemorate St. Anastasia.
After Terce the third Mass is sung. At the Gospel pericope for this Mass is In principio the Gospel of the Epiphany is read as a proper last Gospel.
Second Vespers has yet a third set of proper antiphons for the feast and will be used through the Octave. The following feast of St. Stephen is commemorated.
In the 'liturgical books of 1962' there a fewer differences today with the old rite. At Mattins, and for the Octave, psalm 88, Misericordias Domini is cut from 51 to 36 verses. The verses from Tu vero repulisti et despexisti to the end are omitted. In the third Mass the last Gospel is omitted and at Vespers no commemoration of St. Stephen is made.

May all readers have a very blessed and Holy Christmas
Posted by Rubricarius at 08:01

A couple of observations on the differences in the 1962 Books:

1) I live in New York City, where nearly all the traditional Masses use 1962 rubrics. At every Mass I attended during Advent the Benedicamus Domino dismassal was used. A commemoration of the vigil was made last Saturday, and the Priest at today's High Mass read the Epiphany Gospel for the Last Gospel. Their books appear new, so I don't think it's that. Perhaps there is more sympathy for the old ways than we give credit for. I'm afraid to ask the Priests directly, for fear that if they are doing these things out of ignorance they may stop.

2) The Matins verses from Psalm 88 are included in the newest version of the Roman Breviary (nova et vetera 2008) and were sung at the Matins I attended Wednesday evening.

Maybe things are changing for the better.

1) Many Ordo customers belong to groups that 'officially' use the 1962 rubrics. Obviously their details would never be revealed.

2) Thank you for infoming us of that. Revisionism is rife at the moment but the 'authentic' 1962 publication omitted those verses. Likewise I have noted that a republication of the 1962 missal has the layout of a pre-1962 missal: i.e. the Canon pages separate Holy Saturday from Holy Easter. In the 'authentic' 1962 missal the practice was followed of printing the Canon pages between the temporal and sanctoral cycles.

I believe the "authentic" 1962 Breviary would have had a Pius XII Psalter as well. The new one uses the Vulgate.

Both, actually. John XXIII himself was far from keen on the Pius XII psalter so versions exist with both that and the Vulgate.