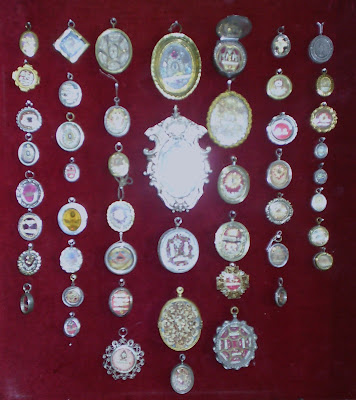 Rubricarius is feeling very contrite and ashamed of himself.

A few days ago I made a comment in response to a reader about the antiquity of the Vigil of All Saints and I said that it was fourteenth century. Mea culpa, mea culpa, mea maxima culpa and may I be forgiven for this perncious error. Often when looking quickly for historical information on feasts I consult one of the Supplements produced by the 1948 Commission for General Liturgical Reform: Memoria sulla riforma liturgica: Supplemento III Materiale Storico, Agiografico, Liturgico per la Riforma del Calendario. This was published in 1951 in Rome. 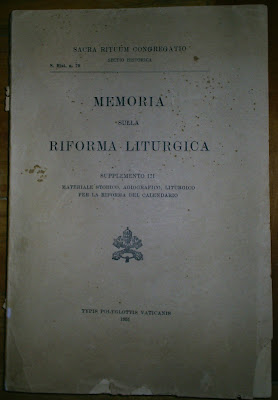 On page 140 there is the entry (below) stating that the Vigil appeared during the fourteenth century, which I stupidly took at face value when I replied to 'Gem of the Ocean'.

At the weekend I spent twenty minutes taking a cursory glance at some of the volumes from the Henry Bradshaw Society publications in my library and noted the following:

Clearly, the Vigil was established by at least the tenth century. So we can draw the conclusion that a secret papal Commission established to plot out a reform of the liturgy either couldn't afford a subscribtion to the HBS and didn't have access to the manuscript rooms of the world's libraries (despite sitting on top of one), or, to say the very least, that a little cheating, or more than a little, went on to justify the implementation of their reforms.

I really should go through the Commission's published works in some detail with a critical eye. Indeed several years ago my late friend Gregory Woolfenden at a lunch was perusing these documents of Pius XII's Commission and coming out with remarks such as "Bloody Hell - Domincae per annum! When was this written?" between copious imbibing, as was his style. "You need to get off your ar*e, stop wasting time on the Internet, and publish some of your researches."

I should really take that, very good, advice on board as a penance for insulting, through laziness, the Vigil of All Saints.
Posted by Rubricarius at 08:01

I really wish you would! Being too lazy to do any such thing myself, I nevertheless would greatly value what you might uncover about this obscure business of the crypto-commission and their "ricerche scientifiche." As always, God bless you and your fine work.

You know more about Liturgy than I know about Tolkien Rubricarius. Going over previous posts of mine, there aren't many errors, but the odd one crops up and sometimes they are glaringly obvious (at least to me). Your blog is highly interesting and your Ordo is highly useful all the same.

Thank you both for your kind comments.

I am but an amateur compared with dear Gregory Woolfenden. I so wanted him as a Ph.D. supervisor but the LORD clearly had other plans for him. GW could make a remark that I would find revelatory and set me off on a whole new angle of research and understanding. One such comment was a practice he found when he moved to the USA of his Ukranian parish casting lighted triple candles into the waters to be blest at Epiphany - an Old Believer practice GW later confirmed, with texts, to me. Makes one think about triple candles and their significance...

Thanks for looking up all that detail.

My Saint Andrew Missal, page 1543, notes that, 'As there was already a feast in commemoration of all the saints, celebrated at first at various dates in various churches, then fixed by Gregory IV in A.D. 835 on November1,'.

From this I conclude the feast of All Saints must have been earlier than A.D. 835.
In Christo,
Anthony

Thank you for that.

The date of the Vigil is that which is called into question with the 1948 Commission describing it as XIV century.

My suspicion would be that the Vigil is as old as the feast itself. In some of the ancient sacramentaries most feasts had a Vigil.