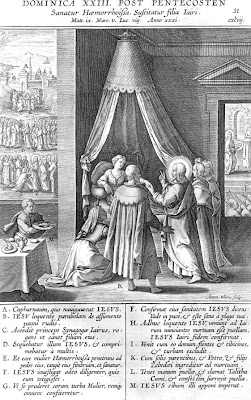 Today is the twenty-third Sunday after Pentecost and the third Sunday of November. It is also the Octave Day of All Saints. If the second Sunday of November falls after November 5th it, and the following week, are omitted and the third Sunday celebrated. (In the 'liturgical books of 1962' the second Sunday and its week are always omitted.) The Gospel is from St. Matthew and is the account of the LORD rasing Jairus's daughter from the dead.

At Vespers yesterday the antiphon on the Magnificat was Muro tuo of the Saturday before the third Sunday. Commemorations were sung of the Octave Day of All Saints and the Four Crowned Martrys.

At Mattins in the first nocturn the Incipit of the book of Daniel the Prophet is read. In the second nocturn the lessons are from the Book on Virgins by St. Athanasius and in the third nocturn the homily is from St. Jerome. At Lauds commemorations are sung of the Octave Day and the Four Crowned Martyrs.

At Prime both Quicumque and the Dominical preces are omitted because of the Octave Day.

Mass is sung after Terce. The Gloria is sung, the second collect is of the Octave Day, the third of the Four Crowned Martrys. The Creed is sung and the preface that of the Trinity.

Vespers are first Vespers of the Dedication of the Lateran Basilica with commemorations of the Sunday and the Octave Day.