The Presentation of the BVM 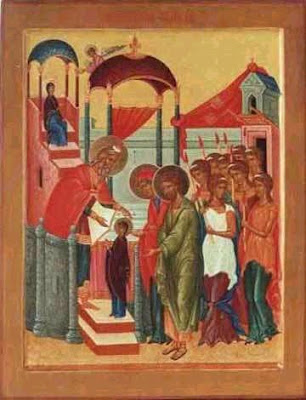 Today is the feast of the Presentation of the Mother of God in the Temple. In contrast to the Byzantine East where the feast is counted as one of the Twelve Great Feasts, in the West the feast has generally held a lower rank and in the Roman rite is a greater-double. The feast was actually supressed by the Commission responsible for the Tridentine Missal of 1570 and was re-introduced by Sixtus V in 1585. The feast, as the 'Obalation of the BVM in the Temple' appears inter alia in several English Calendars before 1100 e.g. London British Library: Cotton Titus D.XXVII., 3r-8v and London British Library: Cotton Vitellius E.XVIII, 2r - 7v (this information comes from the interesting 'Saints in English Calendars before 1100', HBS, Vol CXVII).

First Vespers was celebrated on Friday, the antiphons and psalms being taken from the Common of the Office of the BVM. The antiphon at the Magnificat and collect are proper to the feast. The Doxology Jesu tibi sit gloria is sung at the conclusion of all hymns of Iambic metre in the Office.

Mass is sung after Terce. The Gloria and Credo are sung and the preface is that of the BVM with the clause Et te in Praesentatione.

The feast yields in concurrence to the Sunday (as it is only greater-double). However the Office hymn, Jam sol recedit igneus, is sung to the Marian tone and has the Doxology noted above. The feast of the Presentation is commemorated and a commemoration of St. Cecilia VM is also sung.

In the 'liturgical books of 1962' the feast has been reduced to third class. There is but one nocturn the scriptural lessons being those of Saturday. Ferial psalmody is used throughout. There is no special tone for the hymns and no proper Doxology. The Creed is not sung at Mass. At Vespers there is neither commemoration of the Presentation or of St. Cecilia who is omitted this year.

The icon comes from an interesting website explaining the art and theology of icons.
Posted by Rubricarius at 14:09