A Treasure for free! 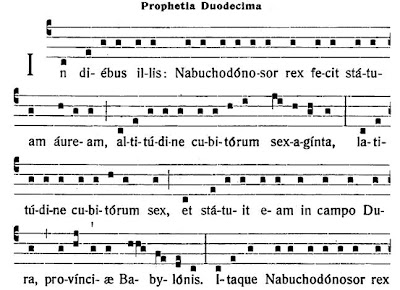 Jeffrey Tucker at the New Liturgical Movement has posted a pdf version of a fascinating book, Laudes Festivae, by the late Dom Reiser, OSB.

Download it, save it, use it and treasure it! It has a plethora of wonderful tones for rites throughout the Liturgical Year.

In the past I have arranged for it to be used at Mattins of the Nativity, for the second nocturns of Tenebrae and other services of Holy Week. My personal favourite is the wonderful fifth tone setting of the Twelfth Prophecy on Holy Saturday.

I first heard it sung in Durham at Dr. Glover's Triduum by the late Richard Holban in 1991. I had heard about this setting for the twelfth prophecy (there are actually at least two settings) from the late Fr. Michael Crowdy. When I approached Richard about it he subsequently asked the late (yes, most of the best people I have known seem to have departed this life) Fr. Sir Hugh Barrett-Lennard Bt. if he knew anything about it. Those familiar with the late Sir Hugh's splendidly unique and eccentric style will not be surprised to learn that he responded by signing the entire prophecy from memory on the spot. Those not familiar with Sir Hugh may gain a flavour of what they missed from this obituary. This year at the Triduum I served I had the honour of singing it, not as well as Richard would have done, but at least I did sing it, and enjoyed doing so immensely.

Twenty years ago a then novice at Ealing Abbey, in West London, gave me a copy of this book, for which I am very grateful. Dom Reiser had also composed some, unpublished, very ornate settings of the Lamentations of Jeremy. One year we used those too at Durham...

This is a lovely resource. Do download it and do use it!
Posted by Rubricarius at 19:07

Are there any photos of this year's Triduum, or would that be indiscreet for those involved?

Alas no photographs for the reason you suggest.

Well, that is a pity, but at least it is a comfort to know that the traditional Holy Week is being celebrated somewhere. I only hope that the catacomb days will soon be over.

Has the download link been removed? I can't see the PDF file...

No, the link is still there.