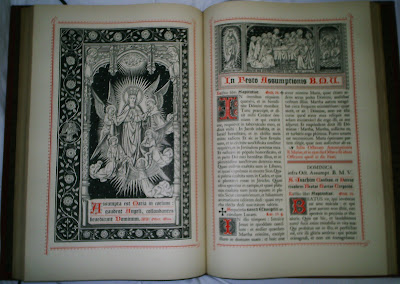 It is quite interesting to see intelligent criticism of the 'makeover' the feast of the Assumption suffered in the 1950s on the blogosphere such as here and here.

Picking up my copy of F.E. Warren's translation of the Sarum Missal of 1526, the collect for the Mass of the Assumption, Veneranda nobis, different from our familiar Famulorum tuorum, caught my eye and seemed worthy of a little more thought.

'Let the honoured festival of today, O Lord, bring us continued aid; on which the Holy Mother of God underwent temporal death, yet could not be holden by the bonds of death because she bore incarnate of herself Thy Son our Lord. Who liveth etc.'

The other texts, apart from the collect are essentially the same as in the Roman rite. However, Sarum gives two Epistles, the first the familiar In omnibus requiem (the same as in the, slightly out of focus, photograph from a Book of Epistles and Gospels above) but the other is a cento from the Canticle of Canticles (3:11; 4:1, 7, 8, 10 -13, 15; 5:1, 6: 8, 9; 7: 6, 7). An interesting rubric directs that the two epistles are sung in alternation during days within the Octave ensuring that the second is sung on the Sunday within the Octave and on the Octave Day itself. The text of the cento reads thus:

'Go forth, ye daughters of Zion, and see King Solomon in the diadem, wherewith his mother crowned him in the day of his espousals, and in the day of the joy of his heart. How beautiful art thou, my love, how beautiful art thou! thy eyes are dove’s yes, besides what is hid within. Thy hair is as a flock of goats, which come up from mount Galaad. Thou art all fair, O my love, and there is not a spot in thee. Come from Libanus, my spouse, come from Libanus, come: thou shalt be crowned from the top of Amana, from the top of Sanir and Hermon, from the dens of the lions, from the mountains of the leopards. How beautiful are thy breasts, my sister, my spouse! Thy breasts are more beautiful than wine, and the sweet smell of thy ointments above all aromatical spices. Thy lips, my spouse, are as a dropping honeycomb, honey and milk are under thy tongue; and the smell of thy garments, as the smell of frankincense. My sister, my spouse, is a garden enclosed, a fountain sealed up. Thy plants are a paradise of pomegranates with the fruits of the orchard. Cypress with spikenard. The fountain of gardens; the well of living waters, run with a strong stream from Libanus. Let my beloved come into his garden, and eat the fruit of his apple trees. I am come into my garden, O my sister, my spouse, I have gathered my myrrh, with my aromatical spices: I have eaten the honeycomb with my honey, I have drunk my wine with my milk: eat O friends, and drink, and be inebriated, my dearly beloved. One is my dove, my perfect one is but one, she is the only one of her mother, the chosen of her that bore her. The daughters saw her, and declared her most blessed: the queens and concubines, and they praised her. Who is she that cometh forth as the morning rising, fair as the moon, bright as the sun, terrible as an army set in array? How beautiful are thou, and how comely, my dearest in delights! Thy stature is like to a palm tree, and thy breast to clusters of grapes.'

(Three further volumes I have show both collects but are unclear about their use: HBS CIX The Winchcombe Sacramentary, CVII The Durham Collectar and XI The Missal of Robert of Jumieges)

Moving on several centuries The Westminster Missal (available as a reprint of HBS I, V & XII) has the same arrangement as the Hereford and Sarum Missals referred to.

I would be interested to know whether the migration of Veneranda nobis to Mass is a practice confined to English use. Does anyone have examples from elsewhere? Looking at the richness and diversity of the traditional texts surrounding this lovely celebration, the Tradition of the Church, in both East and West, is clear that the Virgin died but death could not hold her. The events of 1950 muddied this clarity and resulted in the destruction of ancient texts and their substitution by mediocre and banal compostions. The delightful, charming and (frighteningly) erudite Fr. John Hunwicke describes the novel 1951 collect, Omnipotens, as 'a modern composition which I would describe as a dollop of dogma followed by a platitude' in his post linked to above.
Posted by Rubricarius at 09:55

Thanks for the link Rubricarius.

Indeed Munificentissimus Deus is astoundingly unclear for a bull effectively dogmatising a feast-day. It makes no mention at all of the corporal death of the Blessed Virgin (a reality for all) but merely of ''the end of her earthly life'' - in this sense the new Collect is quite dangerous in this ambuguity.

Indeed arguably Pius XII achieved nothing but to make a travesty of a once noble and ancient feast. Did he accomplish anything for the good of the Church?

"It makes no mention at all of the corporal death of the Blessed Virgin (a reality for all) but merely of ''the end of her earthly life'' - in this sense the new Collect is quite dangerous in this ambuguity."

He left the door open on purpose for the discussion on whether or not she suffered death.

The whole trouble with this apparent reticence of Pius XII is that the immortalists - the minority who held that Our Lady never died - are Western innovators arising in Baroque times, and against whom stand not just the majority of authorities, but all the East and all the West prior to the 17th C., plus the very vital liturgical testimony that Collects such as Veneranda provide.

By not saying that Our Lady died first, in effect Pius XII gave a late minority opinion new life, and this led to the suppression of the testimony of the liturgy to this! For the Dominicans in their last pre-Conciliar Missal still had the Collect Veneranda, but, when they were readying their very large Dominican Supplement to the modern Mass and Office, Rome forbade them to include Veneranda: for the opinions it expresses were considered scandalous by ignorant Roman officials, brought up on "(the latest) Magisterium Alone".

Thank you so much for that. I confess to not having looked at my Dominican Missal yesterday - I should have realised that the Dominican Rite being so close in many ways to Sarum would have Veneranda nobis.

How depressing that centuries of liturgical tradition come to be eclipsed by a (relatively) modern fashion. What is ancient and venerable has the least currency in modern Catholicism - depressing!

But the Roman Rite (Missal) before Pius XII DID NOT have the Collect Veneranda, correct?

So, most people, who were not likely to attend the Mass according to the Dominican, Sarum, etc., Uses, were not going to be aware (at all) of the difference between the Collect Veneranda and the new Collect under Pius XII.

What is ancient and venerable has the least currency in modern Catholicism - depressing!

If ever there was an understatement...

This rash and indecorous criticism of the dogmatic Bull of the late Pope Pius XII, and of the new formulary "Signum Magnum" that accompanied it, is all very disturbing, to say the very least.

The amateur "liturgists" and "lay theologians" of the internet seem to be losing the more and more of what the "sensus Catholicus" really is.

This is a problem that all "traditionalist" groups seem to share [in the laity and amongst the clergy], whether they accept "John XXIII" et al. as legitimate Roman Pontiffs [and therefore avail themselves of "indults," hybrid "rites" and such things] or reject them as apostates [and therefore use the Roman Rite].

There will come a time when the blogsters will come to criticize and reject even the reforms of Pope St. Pius V, and encourage the use PDF editions of the Sacramentaries and other ancient MSS at the Altars. It's only a matter of time it seems.

A self-indulgent aestheticism in ceremony and ritual, and an intellectual pride that finds its delectation in verbose research and cunning conclusions, is all fruitless and makes us no better than the Pharisees who attacked Our Lord throughout His public life. Without the cultivation of the interior life, and perseverance in prayer and in the exercise of the virtues, all this liturgical science and "taste" is really worse than nothing.

Rubricarius, it would be a witness to your moral and scholarly integrity if you would allow this comment to be published, that it may be seen that you respect other points of view, not just whatever suits your tastes and proclivities. Thanks.

People who attended Roman rite celebrations would have heard the collect Famulorum. If any collect in the history of Roman liturgy were to be entered into a competition for the best collect of all time Famulorum would have to be a favourite to win as it is quite sublime.

Andre "He left the door open on purpose for the discussion on whether or not she suffered death."

Hardly fits the bill for a dogmatic pronouncement does it, if the subject matter is still up for debate?

Thank you for your comments and of course you are entitled to your view. However, it seems what you are saying is that criticism is forbidden if the subject is Pius XII (though I would make a guess you would have no qualms about criticising the maligned Paul VI).

The Tradition of the Church, from orthopraxis both Western and Eastern is that the Mother of God died and later her body was re-united with her soul. Some splendid photographs of the Mystery of Elche, specifically approved by Urban VIII published on the New Liturgical Movement illustrate this Tradition perfectly.

By your logic Urban VIII was in error and the latest fashion in doctrine must always be the most trustworthy, until of course a future pope declares otherwise.

'By their fruits' you quote - well just look at the fruits of twentieth century liturgical tinkering and the rejection of liturgical orthopraxis - you can see them in 99.99% of Western rite Catholic churches on the planet and the parody of liturgy that takes place therein.

Now if I have made an error in my comments concerning the history of Veneranda nobis or Famulorum I would be delighted to be corrected.

As to the 'indecorous' criticism I still maintain that the Signum magnum texts are banal and far inferior to the traditional texts and the definition raised more questions due to its variance with the tradition of the belief (although of course the text of the bull refers to these and, specifically, to Veneranda nobis)than it answered.